From my mailbox on Tuesday, Letter #1:

My sdzssrazfh
7 seven year old son has demonstrated to me that he can lock and unlock the car by car by himself from inside, initiate conversations, and look before walking across streets. I did not see anything wrong with leaving him in the car while I go grocery shopping where the parking lot entrance has speed bumps. I have been doing so over the last year with the result of my son gaining confidence and maturity, sometimes reading, petting the dog, doing homework, or just looking around.
Â .
Just yesterday I came out to the car to see 2 police units by the car talking to 2 individuals near my car. The officers then approached me and asked me why I felt it was alright to leave my 7 year old in the car. I responded that it is not hot out, he can get himself out, and the family is dog is also in there with him. The officers accepted this but informed me that I could be charged with neglect because of the possibility of him getting taken from the car.
.
Luckily I wasn’t [charged] and they did let me go, after running me through the database , verifying my son could actually lock and unlock the doors, and admitting that they were left in the car at that age without incident.
Â .
While the officers acted professionally and reasonably it makes me shudder to think that I could actually be charged as a criminal for leaving my son in the car for 20 minutes. The very individual who is supposed to be protected — my Â son — could have had his future destroyed. My son is thriving at the private school he attends, which I would have trouble affording if I had huge legal bills to deal with let alone the likely employment issues I would face. Being a single parent could also bring even more issues which I will not get into here.
Â .
I had to explain to my son that it was basically against the law for me to leave him in the car prompting him to cry and say he hates the police. I had to explain to him that the police were not bad guys and were doing their jobs. I also had to tell him that the people who called them thought they were doing the right thing and that they weren’t in fact bad guys (I found it hard hard to tell him this last bit).
Â .
This whole thing reinforces what I’ve always said about the threat of busybodies outnumbering the threat of abductors, pedophiles, etc. by more than 1,000 to 1.
.

True that. But I depending on where you live, what you Â did was NOT against the law. Here is a list of those laws, state by state. (For future ref, these are at the tab “LAWS” at the top of this blog.)

I just left my kids in my locked, turned-off car for 2 minutes while getting their prescription at CVS. My car is only a year old and well insulated (at least to keep the kids warm for a few minutes) so I figured no big deal.

As soon I I get get home, cop shows up, and asks me if I was just at CVS and left the kids in the car. I said, yes and explained what I just explained to you above. Someone must have come out and complained, called cops and gave them my license #. I asked him if itâ€™s against the law, and he said no, but sometimes safety for children can be a concern. To the best of my knowledge, and after some research there is nothing illegal about what I did in Ohio.

Luckily, the cop was less feisty after I explained everything to him. But in principle, Iâ€™m not a fan of a cop being able to come to my house and tell me what to do when nothing I did was illegal.

EOD [End of day], he said to leave this between us and nothing to see here. But he still came to my house even though I legally did nothing wrong. In my opinion, that behavior (even though the cop wasnâ€™t a prick) is still; in principle, harassment.

I tweeted at you because Iâ€™ve followed your movement after I saw some videos on Reason and really got into your movement about being Free-Range. Itâ€™s the principles that are most important to me, and one day my wife and I can pass our principles onto our kids. I followed you in the first place because your principles aligned with mine but also brought up unfounded fears about numerous issues.

EOD, I want to bring this issue to light with my local mayor. Obviously, youâ€™ve dealt with situations like this in the pastâ€¦any recommendations on how to address this to raise public awareness and also let the authorities know that they canâ€™t harass people?

I would be thrilled if John talks to his mayor, and I’d recommend him proposing that the town go “Free-Range,” Â — that is, the town declares itself to be proactively in favor of kids playing outside, walking to school, and being allowed some unsupervised time when the parents believe it is safe.

This does not endorse or ignore real neglect. It just assumes that kids are fine doing the things kids have always done on their own — including waiting in the car — unless there are exceptional circumstances in which the child is in immediate and serious danger. (Those words were written for me by a lawyer!)

A Free-Range town is attractive to parents because they know that they are not going to be second-guessed by a busybody with the power to disrupt their lives. It also would be a place where kids play outside, and when they do that, other kids join them. Heartwarming. Healthy. Happy. Property values would go up.

Or so says me.

Meantime:What does it mean when the cops act as if they are being exceptionally kind to let us off the hook when someone reports us as “negligent”?

It means the cops don’t have to do that. It means we can be judged and even charged if we make a rational, reasonable decision about when our beloved children are and aren’t safe.

Anyway, this Thanksgiving I’m grateful that neither of these dads got charged. And by next Thanksgiving I hope a whole lot of cities and states will have declared themselves Free-Range. I don’t think that day is far. – L. 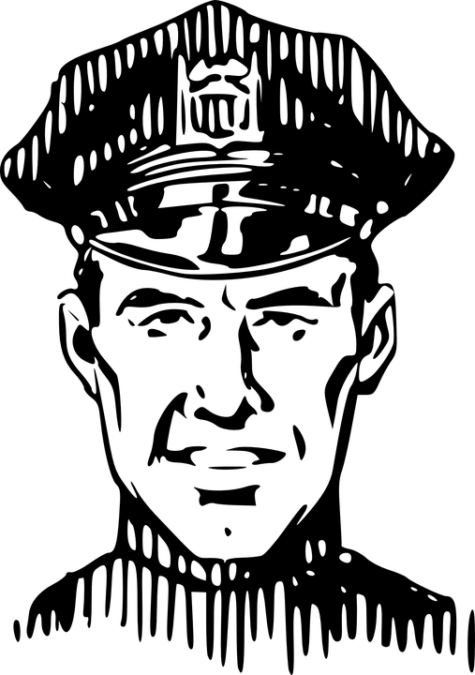 Sir, I clearly love your children more than you do.

We Are Turning Our Children into Middle-Aged Slugs
Dying, Wheelchair-Bound Sex Offender with Alzheimer’s Too Dangerous to Stay at Hospice Near Preschool

46 Responses to One Day, TWO Letters from Dads Visited by Cops for Letting Their Kids Wait Safely in the Car