Readers — Please spread the word, especially to nervous parents: If 2013 keeps going the way it has BEEN going, crime-wise, we are about to experience the szybdynifr
LOWEST MURDER RATE SINCE 1906.Â That’s according to Rick Nevin, an economic consultant and anti-lead activist. (See his chart, below.)

THE LOWEST MURDER RATE in OVER A CENTURY?Â

Yes indeed. That’s not just lower than when WE were kids. That’s lower than when our grannies and even great-grandparents were kids, and I am pretty sure their parents didn’t make them wearÂ GPS watchesÂ to track them every second. Nor did their parents nervously drive them to the bus stop, or forbid them to play on the front lawn unsupervised. Nor were theÂ cops picking them up when the walked to town at age 7, or 11. And yet they were in MORE DANGER of being MURDERED than our kids are today.Â

Note: The decline is not a result of helicopter parenting, as most murder victims are adults and we have not been helicoptering them. And we certainly weren’t helicoptering back in the ’40s and ’50s, when crime was also low. In other words: This is simply good crime news. Nevin believes it’s a result of lowering the amount of lead exposure, which has meant less brain-addling. I’ve heard other rationales, too, from more police to better drugs for treating the mental illnesses that can lead to criminality.

Whatever the cause(s), maybe this is a sign that we should start allowing out kids back out into the world, rather than “protecting” them from it. Or, as policy analyst Ben Miller of Common GoodÂ says: Maybe it’s “aÂ sign that our priority should be promoting common sense, instead of letting fear of every conceivable risk take control of our laws and rules. While our communities grow safer, we keep thinking up new fears — and rules — that prevent us and our children from enjoying the benefits of our safety.”

Let’s not look this gift horse Â in the mouth. For one thing: Ick. All those teeth and horse breath. But also: A gift is to be appreciated. And what a lovely one to give our kids. – L. 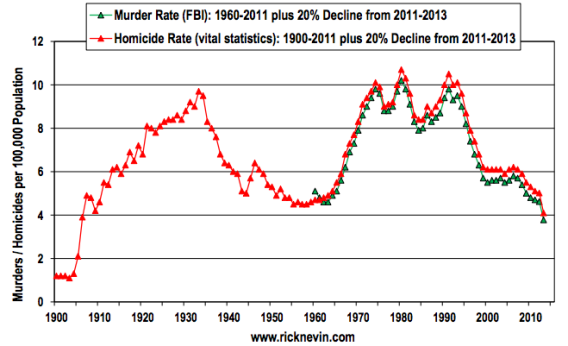 FILL IN THE BLANK: You Know You’re a Free-Range Parent When…
UPDATE! Stick A Needle in My Eye? Not Anymore!