.
Obviously, sbrairdyrf
this young man would appreciate your help:
.
Dear Free-Range Kids: PLEASE READ AND RESPOND!
.
I’m a 14-year-old American male, and, until early November, had a father who led a Free-Range parenting style. He enjoyed this site a lot and talked about the things he had learned here. However, on November 11, I got into trouble with the police regarding an inappropriate statement I had made about my school online. Rather than allowing this to be another experience in my ascent to maturity, and acknowledging the fact that I had learned my lesson about Internet responsibility, my father took this as an opportunity to reject everything about kid’s rights from this site and go all “Big Brother” on me.
.
From then on, he has put “parental settings” on my computer that allow him to manage and view every click of my mouse, and completely restricting my access to video games (I don’t play the mindless shooter ones — I prefer intellectual role players) as well as making me have meetings with him every day in which we discuss my schoolwork and grades. (I have never had any problem academically, so the necessity of this remains unknown.)
.
Whenever I step out of line, repercussions such as blocking websites I enjoy occur. He hides this obvious power grab under the guise of that “it bothers him that I don’t read as much as I used to.” The same can be said for my other two siblings, neither of which are suffering from the same restrictions.
.
I had assumed for the last three months that when life was back to normal, he would return to his old ways of Free-Range parenting. I was driven to write this comment by him explicitly stating this morning that, after the ordeal with the police is over, he would not be removing the restrictions or ending the useless meetings, as well as the fact that last night he announced a “New Deal”-style plan to up the amount of chores and work for the whole family.
.
Please, please, PLEASE respond with advice, links, stories, ANYTHING that could help stop this authoritarian change! — James.

James — no matter what restrictions or worries of you dad’s that you have to live under for the time being, I feel like you are headed for a happy and interesting life anyway. That’s thanks to your Â curiosity and your analytical mind, Â not to mention the fact you even thought of sending a letter out to someone whose outlook interests you.Â

I’m sad that your time sounds excessively restricted now, but your long term prospects look good. In the meantime, you might want to read — read! — Malcolm Gladwell’s “David and Goliath.” He has a lot to say about the surprising up-side of down experiences, including in youth. – LenoreÂ

James wrote back saying he would love to hear the “advice of the Free-Rage Community,” and added that:

In my distress over recent developments, I neglected in my query to specify certain facts. For one, the problem is no longer whether I am actually a ‘bad kid’ or not. (The inappropriate statement online was a “joke” Instagram post about the prospect of a school shooting at our school. At the time I thought it was just simple dark humor, in retrospect I see how threatening it could have seemed.)

My father understands that I am not violent and that I do not think about dark things like this in a humorous light. Â Now his restrictions are justified by the factÂ that I don’t read as much as I used to. He attributes this to my more recent interest in video games and social media. This is in part true, however, the games I play are very intellectual games with strong, thought provoking stories, and I use social media not for mindless interaction but for political discussion. I believe that a large part of my dip in reading is due to my fresh transition from the laid-back, free days of middle school to the rigorous academic and social environment of 9th grade and beyond.

James went on to explain that his parents are divorced and when he’s at his mother’s, his restrictions are fewer. Anyway, if you have some good ideas on how to recapture a formerly Free-Range parent’s trust, please share them with James! – L. 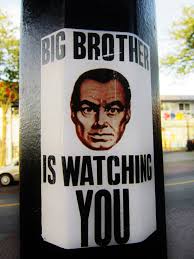 My dad went from Free-Range to Big Brother.