Mother’s Day is usually about dandelion bouquets and a first scorched effort at French toast. It is focused, in other words, to the moms of young, mommy-smitten kids.

This piece comes to us from Deborah L. Jacobs, author most recently of Four tryfhrteaf
Seasons in a Day: Travel, Transitions and Letting Go of the Place We Call Home, from which this essay is adapted. It’s about being the mom of an older kid, and still evaluating your role. You can follow Deborah on Facebook and Twitter.

Friends and family who heard that my husband and I would be going to France for three months, the week after taking our only child to college, had mixed reactions.

Some applauded our plans to start a new chapter. Others speculated that since we would be away ourselves, we wouldn’t notice the vacancy in our home. A third group offered to help out if our son, Jack, needed anything while we were in Europe. Certainly they meant well, but they seemed to think that we were abandoning him, while our goal was to help launch him as a confident, independent young adult.

Of course, we wanted to know any details of his new adventure that he was inclined to share. But we didn’t see a purpose – or benefit to him – of being on standby alert “just in case.” And “just in case” what, for example?

Raised as a free-range kid in New York City, Jack is street-smart, observant, and adapt at navigating subway snafus. But as a high school senior, he was terrified of what lay ahead. I wanted him to believe that we can get comfortable with uncertainty and embark on adventures that are not clearly charted. And I saw an opportunity to lead by example.

Ken and I are among the many baby boomers who have left traditional work arrangements, by choice or circumstance, sooner than expected. He had been sidelined by back problems and a profound hearing loss. I had resigned an oppressive editorial job to reclaim my independence as a writer. To make up for the loss of a steady paycheck, we planned to rent our Brooklyn townhouse during Jack’s first semester of college and downsize to smaller quarters in rural France.

As our misadventures there turned into a book, on the other side of the Atlantic Jack’s transition, at the University of Colorado in Boulder, went much more smoothly. Initially, he texted several times a day about what seemed like mundane issues – for example, getting to class on time and where he sat in large lecture halls. Perhaps he was testing whether we could still be available to him from afar.

Some of our weekly FaceTime conversations dealt with more pressing concerns – most notably the frat rush. When Jack called us to vent, he had already turned down a bid, or invitation to join. (We were delighted that he made the decision without us.) Because of the eight-hour time difference, these calls couldn’t always be as spontaneous as Jack would have liked, and we were all frustrated when quirky Wi-Fi systems interrupted them. But apart from that, he would later tell us, nothing was different than it would have been with us back in Brooklyn.

I am proud that Jack is now a thriving sophomore, doing well academically and killing it as a sports reporter for the college newspaper and TV station. Most importantly, he is learning to live in a community that doesn’t consist of his two adoring parents.

As with letting our kids cross the street or bike to a friend’s, each mini milestone requires a transition from protector to teacher to let go-er. All are important, even though the last leg  looks like it’s just a goodbye. Actually, it’s a hello to the ever more fully-functioning person we have raised.

Happy Mother’s Day, wherever you are on the journey. 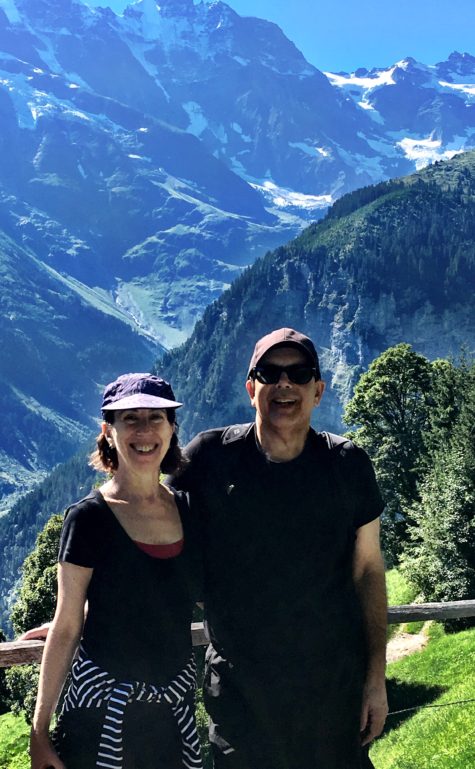 Deborah Jacobs and her husband, far, far from their only child.