Folks istbehzkth
— Here’s a news story of one mom’s fear with the usual missing link: analysis and commentary from someone who can explain whether the fear is justified. The story from WAVY:

Gina Brannon wants the Virginia Beach School District to move her daughter’s bus stop so the 10-year-old doesn’t have to walk past a registered sex offender’s home.

“Its like dangling a carrot in front of a hungry animal,” she told WAVY.com.

Brannon asked the her daughter’s school to change the stop, but her request was denied.

And here’s a response from Shana Rowan, Executive Director of USA Families Advocating an Intelligent Registry, which discusses the harm of sex offender hysteria and explains why a rational approach is so important:

Gina Brannon’s fear over her daughter’s bus stop’s proximity to the home of a registered sex offender is understandable – but misplaced. WAVY TV’s Stephanie Harris also probably thought she was doing the right thing by exposing the situation.

The uncomfortable truth is that there are “potentially dangerous people” everywhere – in schools, neighborhoods, churches and sometimes even in family photo albums. It’s well-established that about 95% of all child sex abuse victims are abused by someone they know, sometimes by someone they love and trust, and who has no previous conviction for a sex offense. The same studies have also found conclusively that sex offenders actually have very low recidivism rates. According to the FBI, abductions of children by strangers are very rare. Abductions by a registered sex offender are even rarer.

The sex offender registry of today has ballooned exponentially to include hundreds of thousands adults AND children, convicted of any one of over 200 crimes that are now registerable offenses. The faces of older teenagers and young men in consensual relationships with underage partners sit next to the mugshot of someone who committed a violent rape or molested dozens of children.

Truly dangerous child predators now comprise a small minority of registrants. The majority of offenders will never re-offend, and are living with their families, trying to move on. Our one-size-fits-all approach to those on the registry only places unnecessary hardship on former offenders who are law-abiding – as well as their families. Worse, the small number of truly dangerous offenders continue to fall through the cracks because resources are spread so thin.

Educating yourself and your children and helping them recognize the signs of abuse will keep them far safer than moving a bus stop. – S. R. 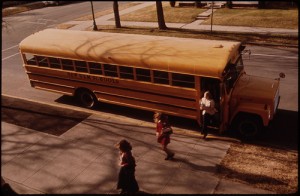 Is a bus stop near a sex offender dangerous?

Technical Problems with The Site?
A Very Different Toy Aisle