Aiden punched Noah because Noah wouldn’t let him on the slide! Ooh! Now what?

Well, if this took place in Missouri, at recess, Aiden could be heading to jail.

In an era when we have finally come to realize that zero tolerance policies and the kyetrdysia
school-to-prison pipelineÂ are permanently damaging kids by saddling them with criminal records and churning them through the justice system, Missouri is going the opposite direction. Starting this year, KFVS reports, a new statute increases the punishment when students get into a fight:

The change means that if your student is caught fighting once they return back to school, they will get jail time.

Right now, if a student gets into a fight and hurts another person, they’re charged with a misdemeanor and then released to their parents.

However, with the new law going into effect on January 1,Â that student will now head to a juvenile detention center and be charged with a Class E felony.

That means they could spend up to four years in jail.

Four years! That certainly is the state stepping up to help its troubled students!Â Fox2NowÂ reports that the new laws will felonize third and fourth degree misdemeanors. What does that mean, exactly? Fox quotes one school district’s website, which says:

â€œStudent(s) who are caught fighting in school, bus or on school grounds may now be charged with a felony (no matter the age or grade level), if this assault is witnessed by one of the School Resource Officers/police officers (SRO) or if the SRO/local law enforcement officials have to intervene.â€

KVFS interviewedÂ Sergeant Jon Broom of the Sikeson (“A great place to live, work, play!”), Missouri, Department of Public Safety who said he hopes this new rule will have exactly the effect on kids that we almost never see on any other humans itching for a fight: They’ll stop and consider the long-term consequences of their impulsive actions.

Um. Yes. That’s exactly why we don’t want 16-year-olds — or 6-year-olds — getting felony convictions for a fight at school.

Missouri is the “Show Me” state. Show Me any evidence that this law helps, rather than hurts, the young people it is ostensibly aiming to assist. – L. 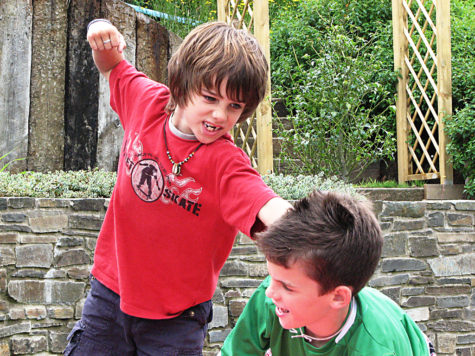 Do these kids deserve a time out? Or a felony conviction? (Photo: Aislinn Ritchie)Â

60 Responses to A Playground Fight? Now You’re a Felon, Kid