October 1, 2012
Hi areadtyfbd
Readers:Â My gosh, Â a stranger entered a San Francisco Bay-area pre-school for less than two minutes and the school tells parents that just “luckily” he did not leave with a screaming toddler under his arm. Because usually that’s what usually happens?
That’s why I LOVE the back and forth, below: The school reacted with overwhelming worry, then a parent named MarkÂ Lakata took the time to write back and put things in perspective.Â Â
Letting any institution sow constant suspicion makes the world a more rotten, paranoid place. Kudos to Mark for fighting back. – L
P.S. The BOLDFACE TYPE is the school’s.

Yesterday during pick up time at our campus, a stranger walked inside of our building by following one of our parents as she entered our campus. One of our teachers saw him do so and brought it to our attention later.
When looking at the footage, he is observed talking to one of our parents in our courtyard (asking her if she worked at the school) to which she said “no” but he followed her into the building as she entered to pick up her child.
Luckily he left the building (within 90 seconds) and never interacted with anyone but this is a warning to all of us (parents and staff), of the importance ofÂ not allowing people to enter the school behind you.Â
Our teachers and I are buzzing you in because we recognize you but we can’t control who you are letting in behind you.
We have lots of parents that have been with us for a while and recognize other parents and do hold the door open to let them in as the polite thing to do….Unfortunately, it is not a safe practice for multiple reasons including parents being unaware of the “if and when” a parent status changes from being allowed to come near his/her child or not (which is confidential information only staff is aware of).
Please pay attention to the following safety precautions:
1- Do not allow ANYONE into our campus while entering or exiting our building.
2- Report to our staff if:

3- Do not allow your children to play outside the courtyard unattended (parents having conversations outside while the children play near our parking lot is unsafe).

4- Please refrain from socializing with other parents inside the lobby area. You may restrict the view we have from the office desk and our cameras.
5- Do not allow your child to operate that door bar (panic hardware); that’s for adult hands only!
6- Do not bring visitors inside our building during drop off and pick up hours. It is not a good time to do so. I know that at times relatives like to come visit their nieces/ nephews/ grandchildren etc. We don’t know them and we rather you keep them waiting in the car. Please notify us in advance if you plan on bringing someone with you or if someone else is to pick up your child; (i.e nannies), etc. Even if they are authorized in your child’s file we want to know. If you choose to leave a relative waiting by the playground, let the staff know as soon as you enter the building that the person outside is with you.
We don’t mean to be alarming but you must agree, we better be safe than sorry. Please assist us enforcing these safety measures!
The well being of our children is ofÂ utmostÂ importance to all of us and we are only able to keep our campuses safe with your cooperation.
Sincerely,
ExecutiveÂ Director
.

TO WHICH LAKATA WROTE BACK:

I found some statistics on abductions that can be used to estimate the probability of preschool abductions.http://www.missingkids.com/en_US/documents/nismart2_nonfamily.pdf
Start with 70 million kids in the US (page 7, table 2).
* Limit that to only 115 “stereotypical” abductions per year, the ones that most parents fear, i.e. stranger abduction with serious effects (table 2)
* Now limit those preschool age (0 to 5) , which leaves 20/year (table 2)
* Now limit that set by the statistics in table 4 (where the abduction occurs) which estimates “2% from school or daycare” and you get a whopping 0.4 cases per year per 70 million kids. That means that probability of getting your preschool child abducted by a stranger from preschool that leads to serious repercussions is about 1 in 175 million per year (or less).-Mark Lakata

Lenore here: Also, telling parents not to hold the door open for people they KNOW is just corrosive! It’s letting fear of a freakishly unlikely event actually poison the REAL relationships that help keep kids safe — community! If you slam the door in my face with a, “I just don’t know whether you should be here!” I will not be super-interested in pursuing a friendship. In fact, I’ll be super-interested in avoiding you forever. So for the “safety” of the kids (who were already safe!!) we are crushing the connections that make us cohesive and community-minded. Â Great. Â – L. 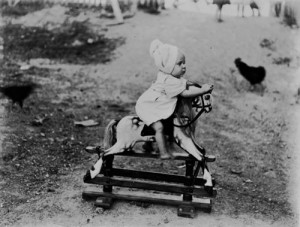 112 Responses to A Stranger Entered the Pre-K for 90 Seconds! One Parent’s Reaction to the School’s Reaction