Readers sfnntyydyt
— Why do I keep blogging? It’s to remind us, literally daily, that there are HUGE CONSEQUENCES when we believe the BIG LIE that our kids are in constant danger. One consequence is that we interpret normal parenting behavior through the lens of both sanctimony and fear, seeing danger where there’s just the usual chaos of raising kids. The consequence of that consequence? Read on:

Dear Free-Range Kids: When my son, now 15, was about a week shy of his fourth birthday, I ran out to pick him up from his preschool, located four short blocks from home, with just my keys and no purse, something I had done many, many times before.Â  (I know — stupid.Â  No ID.Â  REALLY stupid.)Â  I picked him up, and in the course of walking home, he decided he was going to have a meltdown because he wanted to walk down a street that would have taken us far out of our way, and I was in a hurry to get back, so I said “no, not today.”

Well, he proceeded to try and run down the street he wanted to take, screaming and crying, and almost ran headlong into oncoming traffic because he was so worked up that he wasn’t paying attention to anything.Â  I grabbed at him to keep him from going into the street and caught the hood of his jacket and yanked him back to me, whereupon he screamed louder.Â  Out of nowhere, a woman materialized, yelling, “I saw the whole thing!Â  She’s beating that child!Â  I was across the street and down the block and I saw the whole thing! Call the cops!”Â

A crowd began to gather, screaming at me and telling me what a lousy mother I was, which of course terrified my son, and he clung to me, but he was still sobbing and crying.Â  I yelled at the crowd to please leave us alone, couldn’t they tell that my son was upset, that I wanted to calm him down and go home, but they kept converging and screaming and flinging invectives at me — it was terrifying.Â  I sat down on the sidewalk and cuddled my son to me, and he began to calm down…until three police cars and no fewer than TWELVE cops, guns drawn, descended upon us, wrenched my screaming child from my arms (at this point he was struggling to get back to me and yelling, “Mommy! Mommy!Â  I want Mommy!”), tackled me, HANDCUFFED ME behind my back and forced me to await the arrival of a city ambulance.Â

A man in the crowd did take pity on me and let me use his phone to call my husband at work (which HE had to hold up to my ear, since they would not undo the handcuffs), but the cops would barely let me speak to him and it was hardly enough time to let me tell him what was happening.Â  They would not tell me where my child was, and of course since I had no ID on me (I have NEVER done that again, lemme tell ya! Stupid!), they apparently branded me a crazy woman who was trying to beat and abduct a child. The ambulance came, and they hustled me into the back (all the while refusing to tell me where my son was) and took me to the PSYCH WARD at the hospital, where they kept me for several hours in a room locked from the outside and refused to let my husband (who had arrived by that time) in to see me, though apparently he had gotten enough information to track down our son, who had been taken to the precinct and was being guarded by a detective.Â  We found out much later that he had been “examined” for physical and sexual abuse PRIOR to my husband’s arrival — which I believe is illegal.Â  They did let me call my therapist, who, thank God, answered the phone — but it was all she could do to get them to release me to my husband.Â  Fortunately, they HAD released my son to him instead of slapping him into foster care — I shudder to think what would have happened if not.

We were eventually allowed to go home, but I was contacted several days later by a worker from Child Protective Services, who said he was required to visit us, unannounced, every couple of months for a year to be sure that our son was not being abused. The first night he came to see us, I had a chicken roasting in the oven and even offered to feed him if he wanted. What he WAS required to do was look at our son’s bedroom to be sure he was being cared for (he had a big bed with lots of stuffed animals and shelves full of games and books, which I actually think surprised the guy, given what he was probably used to seeing in his work), examine our son physically to be sure there was no evidence of abuse, and ask him some very pointed questions about whether Mommy or Daddy ever did nasty things to him.Â  (He was FOUR, for God’s sake!!Â  Admittedly a precocious and highly intelligent four, but holy crap…the continual insinuations of sexual abuse turned my stomach!)

Anyway, of course no signs of any kind of abuse were ever found — but we lived for SEVEN YEARS with the threat of having him taken away from us, because that is how long these cases stay open on the books.Â  We worried about every bump, every bruise, every argument we had — because of course he was also smart enough to know that he could hold it over us and threaten to “tell at school” if we had an argument, not understanding what the consequences would be if someone believed that we had hit or abused him, or if someone at school noticed a bruise or scrape on his body and thought we had inflicted it.

I swear to you: all I ever did was grab my kid’s coat and yank him back to prevent him from flinging himself into traffic because he was screaming himself blind.Â  He was four, he was having a meltdown. But a bunch of total strangers who were “down the block and across the street but who saw the whole thing” and called the cops as a result could have totally and utterly destroyed our family and ruined my son’s future.Â  He was, and is, a smart, beautiful, charming, talented boy; he has gone to gifted programs throughout school and currently attends a magnet high school, and he has nothing but promise ahead of him. But the actions of one “well-meaning” stranger who thought that a mother struggling with a screeching four-year-old was her business and that she had to “protect” the child, and who was able to draw a crowd around her, could have ripped a family apart and destroyed that child forever.

We are lucky — truly lucky — that eventually cooler heads did prevail and he was allowed to come back to us immediately.Â  I know that in some cases, this does not happen, and it’s a nightmare for the family to get the child back, sometimes going on for years. But let me tell you that I TOTALLY understand the fear of the mom who wrote to you when she said she was afraid that the woman who yelled at her outside the post office had called the police and that they were going to track her down…because I LIVED something like that.Â  It is, quite possibly, the most terrifying thing that can happen to a parent. And I must ask when it became everyone ELSE’S business regarding how to be a good parent to one’s own child.Â  It’s hard to be any kind of a parent these days, especially Free-Range, but we MUST stick to our convictions and raise our kids as we, their parents, see fit. 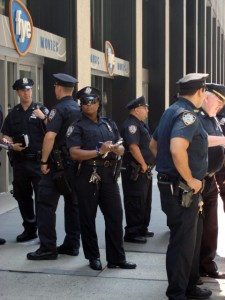 A toddler screaming, a busybody assuming the worst, and then — the authorities.

74 Responses to A Toddler Melts Down, A Busybody Calls 911, Cops Arrive, Guns Drawn, And Then…