Clayton and Kristopher Cadieux, Â 8 and 10, dig up worms to sell to local fishermen (or whoever desires worms), $2.50 a dozen. Unfortunately, sibtaidena
the CBC reports, the boys are now criminals in the eyes of Cornwall, a town in Ontario, Canada, because they set Â up their business on their lawn, and even had the audacity to erect a sign:

…after a complaint from a neighbour, the brothers received a note from the city saying they were breaking a bylaw and had to shut down their business.

The mayor of Cornwall, Leslie O’Shaughnessy, explained that the bylaw requires all personal business sales be conducted within the home, without outdoor signage…. The city told the brothers to move their business inside their home, and to take down their signs on their front lawn.

As the mayor explained so thoughtfully:

“You are allowed to [sell worms] in the confines of your home, with no signage,” he said. “In other words, if people want to pick up worms, they knock on your door, you hand them the worms, they hand you the money, they leave.

Though the crime comes with a $250/day fine — a price that would pay for a mayoral top hat full of worms — the dad says they are not backing down:

“We were livid. Like, God! How could this be? They’re two little kids, eight and 10, selling worms,” he said.

“They’re not going to have pay the fine,” Cadieux added. “I am! Because I’m the daddy, and it’s daddy’s house. But I’m willing to do that for my kids.”

Kristopher [age 10] said the worm enterprise only brought in about $34 a month last summer, and he doesn’t understand why he and his brother are being told they can’t sell worms from their front lawn.

“I didn’t feel too good about that,” he said. “I thought at least we’re doing something. Most of my friends play video games. I’m building responsibilities.”

No, my little miscreant: You are building a rap sheet. Better to go inside and sit down on the couch for the rest of the summer with a nice big bag of Goldfish crackers. You can pretend you caught them yourself, with gummy worms, like a good, law-abiding blob…er…boy. – L 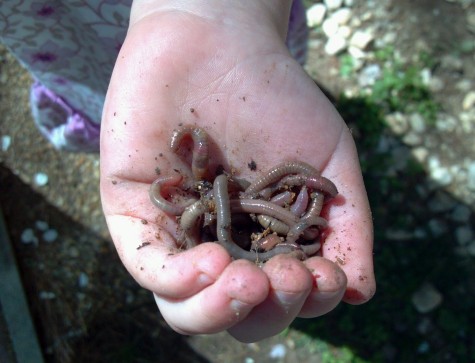 Can All Schools Do This?
“Better Safe Than Sorry” is Wrong