The paragraph below is from a press release about a GPS’ing service parents can subscribe to. When would you need this service? How about when your kids are —

Walking dtdryzfnns
to school solo. Â Sure, you only live a few blocks from school, but letting your kids make the journey alone seems terrifying.Â  Freedom is important, but before saying yes, show them how to send you a Glympse. You can ensure they make no stops or detours, and have peace of mind whether you are at home waiting for them, or at the office unable to concentrate until you know they are home safe.

So the few-block journey is TERRIFYING? How come? Is it through a mountain lion preserve? Or are you supposed to be terrified every second your school age kids venture outside without you?

“Freedom is important,” says the press release. But it encourages you to GPS your kids like furloughed felons. How free is that?

Your kids are not allowed to make any stops or detours because…well, BECAUSE! Letting them pet a dog, or pick dandelions is hardly worth it, when you are anguished with anxiety. We all know that until your children are back in your arms, you will NOT be able to concentrate. How could you? You’re thinking about all the terrible things that could happen in those “few blocks from school”!

This press release then has the gall to say that this service “can help keep parents sane, with limited helicoptering needed.”

How I resent the idea that this is NOT helicopter parenting. How I resent any company trying to make it seem as if this level of surveillance is just normal and necessary and no big childhood-changing deal. Imagine if your parents constantly checked up on you as you walked home or played outside. I’m not talking about them requesting a call when you got to your friend’s house. I’m talking about them checking in on you on your way to and from the friend’s house, AND at the friend’s house, AND everywhere else you went, all the time. “Are you safe now? Now? How about now?”

And the idea that this helps keep parents sane, after it has just introduced the new notion that you don’t want your kids taking a single step off their march directly home and into your arms, lest you be terrified and unable to concentrate — how sane does that sound???

Come to think of it, how sane do I sound, now that I’m talking about this service??? It is driving ME insane by presenting a whole new, unprecedented, previously certifiably mad idea of what it means to be a normal, caring parent.

So, I got a note this week from a guy who went back to his hometown after an absence of several years. The town, he said:

is lovingly preserved, so much so that about 90% of all the schoolboy haunts I remember are still remarkably intact.In the entire weekend I was there, I counted exactly two small children playing in a yard adjacent to the back lane I used to take to school. That’s it.There was a kind of post-apocalyptic feel to the streets. A beautiful summer weekend –and nobody was out.

The apocalypse is fear.

AÂ bomb of psychological terror has been dropped on our civilization, in part by “friendly” products and pitches like this, and its fallout means the kids have to stay inside. Parents, politicians, cops, CPS — a goodly percentage of all adults (and maybe kids, too) have come to believe that any unsupervised child is in immediate danger.

But let us remember this: The walk home from school, except in some truly sad neighborhoods, is no more dangerous than it was when we were kids. In fact,it’s less so. The crime rate is at a 50-year low. Crimes against kids and adults are way down. Even childhood pedestrian deaths are a third of what they were in the early ’90s. What has changed is our perception. And that is thanks, in part, to a marketplace peddling fear in the guise of reassurance. 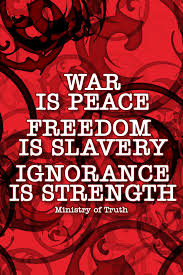 Forgot one, George: Safety is danger.

Forget Tackle Football, Girls! How About Apple Bobbing Instead? — Principal
It’s Okay to be Different