June 13, 2016
.
How drdrtbtafn
do parents get the idea that if they aren’t playing with their kids, they’re not doing their job?
.
It’s such a new and culture-specific idea that when I interviewed David Lancy, author of The Anthropology of Childhood, he said that other cultures actually guffaw at the idea of parents sitting on the floor and playing with their kids. To them it’s as bizarre as sitting on the floor and lapping water from the doggie bowl.
Â .
Not that it’s wrong to play with your kids, obviously. It just shouldn’t be the only option kids have. And yet, here’s a commercial from Care.com suggesting exactly that. The company is a provider of babysitters and such, so of course it would promote the idea of kids needing constant adult supervision and entertainment. But still, the media and the marketplace change the culture, and here’s a way to watch that in action. It was sent in by reader named Alisha, a mom and former Â paramedic firefighter who believes in keeping kids safe — in part by teaching them independence.
Â .
(Note, I could not find the EXACT ad Alisha mentioned. This one may be the short version. If anyone has a link to the longer one, please send.)
.

Dear Free-Range Kids: Have you seen the new care.com commercial? It has a little girl with a soccer ball sitting inside at a table where her parents clean. Kid goes on to say how Saturdays are for fun, and as a kid she has a right to fun and “cutely” says she is calling a lawyer.Â Of course the solution is to hire a housekeeper so that mom and dad can finally take kid outside and entertain her.
.
It just really annoys me that kids and parents today are being told that kids deserve to be entertained by mom or dad at all times and you are somehow not a good parent if you spend a Saturday cleaning instead of playing with your kid. I know it was a privilege if on a Saturday, after getting up on my own and quietly watching TV while eating dry cereal until mom got up sometime after 8 (meaning about 2 hours unsupervised while doing dangerous things like eating and bothering my brother GASP!) if we got to go outside, unsupervised, to play instead of having to help clean our house.
.
I guess I’m continuing the pattern of neglect because I tucked my daughter into bed on Friday night with, “Goodnight, I love you, and don’t even think about waking me up until at least 8 am! If you wake up early play in your room or watch TV, cereal and fruit is on the counter!”

The commercial actually reflects a growing reality: parents are spending more and more time tending to their kids. A 2010 article in the New York Times reported that:

…the amount of child care time spent by parents at all income levels â€” and especially those with a college education â€” has risen â€œdramaticallyâ€ since the mid-1990s.…

Before 1995, mothers spent an average of about 12 hours a week attending to the needs of their children. By 2007, that number had risen to 21.2 hours a week for college-educated women and 15.9 hours for those with less education.

Conclusion? Kids and parents are spending more time together, for any number of reasons. But when kids come to believe they can’t go outside and play without a parent watching — or participating — they are being cheated out of something fundamental: 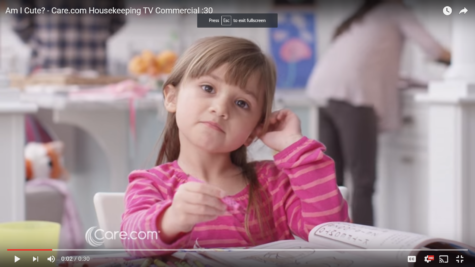 Actually, it’s not so cute to demand all your parents’ time and attention.

OUTRAGE OF THE WEEK: Mom on Electronic Monitor, $25,000 Bail, For Letting Kids Wait 10 Mins in Car Within View, Windows Down
It’s Impossible to be a Parent in Our Hyper-Critical, Hyper-Vigilant, Picky, Panicked Culture

66 Responses to “Am I Cute?” Asks Kid Annoyed that Her Parents Are Cleaning Up Instead of Playing with Her