Here’s how we look to other, less fear-wracked countries. Boldface, mine. (And for contrast, see my yyazyhyzfb
piece in yesterday’s New York Post about not expecting kids to walk to school):

Dear Free-Range Kids:Â I am from Germany and what I read on your webpage is really shocking for me. How did American parents get so paranoid and CPS professionals support that! I am a social worker and a mother of a 4 year old girl and a 6 year old boy. I work for the city of Regensburg at the youth department. Our CPS would NEVER even think about investigating Free-Range kids. Parents who are no giving their kids the possibility to play outside, go to playgrounds, walk to schoolÂ are much more likely to be referred to CPS for counseling than Free-Range parents. The parents here who are helicoptering (Americans would probably see our helicoptering as Free-Range) are considered to be paranoid and not normal by most of the people.

Part of my job is to ensure our city provides a healthy and good environment for kids to grow up. So our city has meÂ professionally investigate how child-friendly the neighborhoods are and make suggestions how to improve. We work really hard to provide playgrounds in all neighborhoods that children can and are supposed to go to by them selves from age 6 on! We check the streets to help make them safe so children can go to places alone! All 6 year oldsÂ are walking or biking or taking the bus to school! The parents only accompany themÂ the first few days to teach themÂ how to do it. We organize volunteers for difficult crossroadsÂ Â who stand there before schoolÂ and when ever the kids come theyÂ help them crossÂ the street. Our whole system is there to make sure that kids can go aloneÂ to school or music lessons or playgrounds or friends.
.
That is always our goal and it is the norm and our kids do grow up healthy, socialized, good at school and safe! There are more kids hurt in car accidents sitting in the back of a car than walking around by themselves even though most kids walk to school by themselves.Â Our kids even take public transportation by themselves like buses and subways.
Â .
The most shocking news are for me the ones about the mother having such trouble because the kid was alone in the yard. Our kids play in the garden alone for hours! My son started playing alone in the garden when he was one year old! He loves it. When our kids need something, they know where to find us and can come. In the mean time we can take care of our household etc., and of course we check on them. The frequency depending on their age.
Â .
I wished your Police and CPS would professionally understand what Â it means to raise healthy and responsible children. I cannot believe that they are supporting this paranoia. Such professionals cannot really believe their way is the only right way. If that was true itÂ would mean that all Europeans are neglecting their children and harming them and endangering them….
Â .
I wish you good luck with you cause and I hope sincerely that Â Americans stop depriving children of all the Learning opportunities of aÂ normal and free and loved childhood . Children are persons not puppets or prisoners. IfÂ I can help your cause by providing information from abroad I am happy to do so.
.
Sinseriously,
.
Anna Schledorm

Yes, I know “sinseriously” is not a word, but sincere + serious just seemed perfect. It also seems perfect to expect kids to play outside on their own, the same way we did just a generation or so ago. – L
. 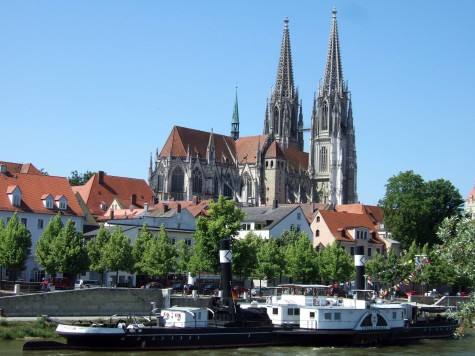 Regensberg, Germany, where the letter -writer allowed her 1 year old to play in the yard by himself. (Of course, she would check on him.)Â

A Survey about Kids and Risk
The Saddest News