Readers — This just in, from jolly old England: Three years ago, a 9-year-old boy horsing around the school playground went to punch his brother, 7, who ducked under the drinking fountain. The older boy, Lewis Pierce, ended up slicing open his thumb on the fountain, and his mom sued the local councilÂ (which seems to be the British equivalent of Â school district) for about 3000 pounds.

The ihyrbebayk
mom wonÂ (yeah, I know), so the school appealed.

At the new trial, according toÂ yesterday’s Daily Mail:

Iain Oâ€™Donnell [the school district’s lawyer], said schools might have to ban the fountains if Lewis was allowed to keep his pay-out, for fear of other potential claims.

He told the court that schools could never be completely free from hazards. â€˜Any part of the premises, for example the corner of a brick wall, could be perceived as sufficiently sharp to cause a laceration if punched,â€™ he said.

The water fountain was â€˜not unduly sharp to normal touchâ€™ and Lewisâ€™s injury was caused by his own â€˜spontaneous and unpredictable actâ€™, the Appeal Court heard.

But she said they were not under a duty â€˜to safeguard children in all circumstancesâ€™, adding: â€˜The law would part company with common sense if that were the case.â€™

It’s weird that a victory for common sense should be so thrilling, but that it is. Let’s hope it’s the Sharp heard ’round the world. – L 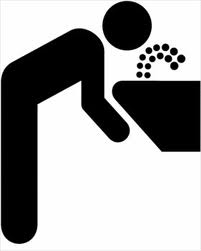 CAUTION: Object may be solid!

32 Responses to Are Drinking Fountains Too Dangerous for Kids? (Surprising Legal Answer!)