A City Councilman in Los Angeles, Mitch O’Farrell, has proposed a bill to keep playgrounds “free of creepy activity” by not allowing anyone unaccompanied by kids to enter one.

Shamefully, that is already the rule here in my burg, New York City. This has lead to the ztseibnztf
arrest of two women who dared to eat donuts on a playground bench in BrooklynÂ (exposing kids to potential predators AND processed food!), and to the ticketing of seven guys who were playing on chess tables too close to a Mahattan playgroundÂ (tables placed there by the city, but whatevs). The fact that the guys had been playing chess there for years and even taught some kids the game was of zero import to the authorities determined to see only potential evil, not actual good.

Kudos, then, to the Los Angeles Times for objecting to this grandstanding law. As the paper put it in an editorialÂ titled, “L.A.’s proposed ban on single adults near playgrounds is fear-based policy making at its worst“:

Oâ€™Farrell arguesÂ thatÂ we canâ€™t assume every adult who wanders into a childrenâ€™s play area is benign. But why should the city assume that every adult without a child is a pedophile?Â

Because we have been that taught worst-first thinking is prudent and wise: Think up the worst-case scenario first, no matter how unlikely, and proceed as if it’s about to happen. We automatically worst-first in many cases when an adult, especially a male, is in close proximity to a child. (Remember the British Airways ban on men being seated next to unaccompanied minors on planes — a policy Qantas clings to still?) And we simply cannot stop fixating on stranger danger, even though the vast, vast majority of child abuse is at the hands of someone the child knows and the family trusts.

Not someone eating donuts on the playground parkbench.

Separating the ages is a form of segregation and prejudice. If you’re looking for a creepy activity, voila. – L 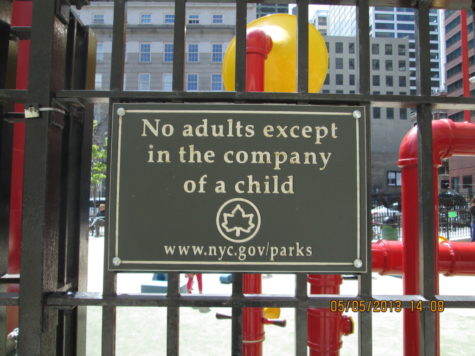 What kind of sicko likes to enjoy the outdoors and watch children play?

Bill Would Cap Jail Time for 18-Year-Olds Who Have Consensual Sex with Other Teens at “Just” 5 Years
Boy, 5, Accidentally Walks to School on a Saturday Morning, While Dad Sleeps In. Cops Come Calling

60 Responses to Bill Would Ban Adults Without Kids from Playgrounds