Welcome to America, 2017, where it requires an act of bicameral legislation to even CONSIDER allowing children the teeniest modicum of self-sufficiency: In Washington State, the House just passed a bill that would allow students to use sunscreen at school without a doctor’s note.

In an article titled, “Lawmakers zafinzrbfy
consider allowing sunscreen in schools” by the Associated Press, the Tri-City Herald reports

…The Democratic-controlled [House] unanimously passed the measure Monday and it now heads to the Republican-controlled Senate for concurrence.

Right now, students must have a prescription or note from a licensed health care professional to use over-the-counter sunscreen products while at school. According to The Office of the Superintendent of Public Instruction, sunscreen is considered to be a medication because it is regulated by the United States Food and Drug Administration and is categorized as a “sunscreen drug product.”

Kudos for this push to restore sanity go to Jesse Michener, the Washington mom who in 2012 sent her daughters Violet, 11, and Zoe, 9, off to an all-day school event on a day that began as rainy (it’s Washington, after all) but then turned so sunny it burnt her kids fiery red when school policy forbid them to apply sunscreen — even as teachers slathered in on themselves. The Huff Post reports:

Michener told The Huffington Post that adults made comments about her kids burning, but because of the law, did nothing about it. She wrote on her blog, â€œone of my children remarked that their teacher used sunscreen in her presence and that it was â€˜just for her.â€™ So, is this an issue of passive, inactive supervision? Where is the collective awareness for student safety?â€ At the very least, a hat might have protected the girls, but, â€œalas, hats are not allowed at school, even on field day.â€

Because, you know. Hats!

And all this is even though one of the daughters, Zoe, has a form of albinism that makes her especially sensitive to the sun.

Skin is just skin, but rules are RULES.Â The Deseret News:

“Because so many additives in lotions and sunscreens cause allergic reaction in children, you have to really monitor that,” said Dan Voelpel, Tacoma School District spokesman, in an ABC News article.

“When Michener pressed school officials on the ban, they told her that there is a state-wide policy that does not allow staff to apply sunscreen to students, and students can only apply it themselves if they have a doctorâ€™s note,” according to the Today article. “The law exists because the additives in lotions and sunscreens can cause an allergic reaction in children…

Yeah, yeah. The good news is that Oregon, Texas and California recently passed similar bills allowing for common sense, and sunscreen, to prevail.

Now if only we could get state legislatures to guarantee that other freedom — the freedom of kids to play outside without their parents risking arrest — we could be getting somewhere! – L. 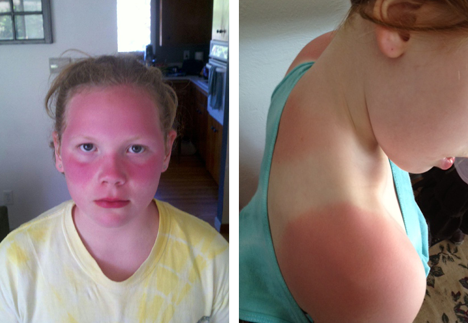 The daughters of Jess Michener in 2012, after school saw them burning but refused to let them use sunscreen without a doctor’s note.

Mom Sues After Daughter Hurt Playing Tag on Playground: “School Should Have Stopped It”
Dad Sentenced to 56 Days Hard Labor for Making Son, 8, Walk Home at Night: “I’d Do It Again”