Here’s a note from a reader who used to design educational toys. But first, let me say that when I went to the Toy Fair here in NYC a few years ago, I was amazed at the way EVERY SINGLE TOY had come up with a way to describe itself as educational. If it was colorful, it was “stimulating the visual cortex.” If it was heavy it “demonstrated gravity.” If it existed at all and you could touch it, it aided in “hand-eye coordination.”

And of course, all those things are true. But they are equally true for things that are NOT toys. We are so eager to give our kids a leg up that we are played like violins by marketers who know that “educational” = $$$.

Years ago, I worked for an independent software house that primarily made computer games. We would contract out to various different companies for products, sometimes proper mass-market games, other times educational or military, and sometimes things that werenâ€™t games at all. Whatever paid the bills.

One particular project was educational, a typing tutor. (Note: I wasnâ€™t on this project, nor did I find out about what went down until much later.) Being a company of game-makers, our people came up with a variety of games that would be fun to play while teaching the kids to type. There was a meeting with the client one day. Our people showed the client what the proposed games would be (I donâ€™t know if they had actual early working versions or just design mock-ups). Our client, an *educational software company*, rejected all of our designs, saying that the games were TOO FUN.

Apparently they were under the notion that, in order for things to be educational, they couldnâ€™t also be fun, or at least the fun had to be minimal. And theyâ€™d been foisting these killjoy experiences upon masses of schoolchildren for years. (Kids like me, who avoided educational games like the plague because theyâ€™re boring, then learned world geography from an actual fun airline simulator.)

Despite some protest, the client was unyielding, and we ended up scrapping all of those games, and replacing them with something that, I can attest, was mind-numbingly dull to play. It was, in my mind, not even a proper game. There was no win or lose. It was copy-over with animations.

I grew up pretty well addicted to typing games. I was always trying to beat my best score, and got myself to ~100 words per minute by virtue of shooting the spaceships and not letting the race car crash. They were my â€œthing.â€ I was probably playing one while this very meeting took place.

I wrote back to say that nowadays kids don’t even need typing games — or typing classes. I kept complaining to my sons’ school that they should teach keyboarding, but none of them ever did. Which turned out to be fine, because today kids pick up typing on their own for the same reason they learn to speak without speaking classes. They want to communicate!
Give our kids some credit: They will learn if they are curious, and they are curious when they are truly learning. – L. 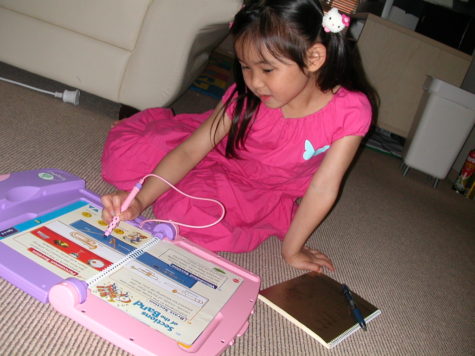 Trying to Close the Achievement Gap, We Have Created a “Play Gap”
Open Floor Concept: A Helicoptering Idea?