Boy Scouts can’t shoot squirt guns at each other. Here’s the nytketikkz
rulebookÂ (see page 99). And here’s the articleÂ for Boy Scout leadersÂ that points out:

Â â€œWater guns and rubber band guns must only be used toÂ shoot at targets, and eye protection must be worn.â€

Water balloons, meanwhile, have a size limit:Â â€œFor water balloons, use small, biodegradable balloons, and fillÂ them no larger than a ping pong ball.â€

First off, I was not even aware there ARE biodegradable balloons. And filling any balloon to only the size of a ping pong ball is like saying, “Please do not grow a pair. Ever.”

But in terms of the squirt gun rules: Why can’t kids shoot each other with a stream of water?

Or is it because of a sort of blind belief that if we outlaw every activity that involves boys being boys — even an activity with the word “Boy” in its name Â — somehow we will have triumphed over original sin AND avoided all possible lawsuits? Win/win…except that this is caving in to a craven idea of America.

Boys do not end up killers because they shoot squirt guns, any more than they end up rampaging nut jobs because they knocked down some building blocks as kids. For that matter, playing Transformers does not mean a boy grows up to become part robot. Kids are allowed to play without us reading a dark future into every shove.

And I say this as a mom who really loves the Scouts. Both my sons belong and it has been great. I admire the troop leaders and all the volunteer parents who help out. And at our troop, at least for as long as my sons have been involved, there has been no discrimination against gay anyone.

But there’s a reason most kids don’t wear their uniforms to school or even discuss their involvement much. It’s the uncoolness factor.Â That factor is not mitigated by these rules.Â

If anyone is going to go on a rampage as an adult, maybe it’s the kids who were forced to wear goggles to shoot a squirt gun at a non-human target. 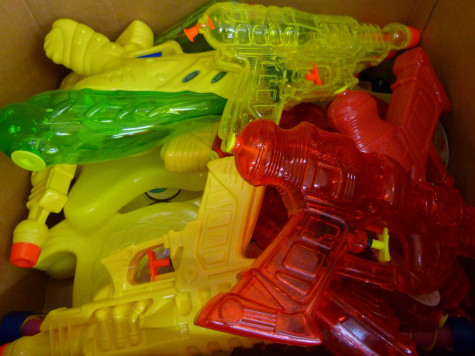 Photo credit: Rusty Clark – Back In One Piece / Foter / CC BY

Man Helps Boy Whose Ball Went Over Fence. Now Police Are Looking for Him
Baby Crawls 40 Feet From Home. Grandma Can’t Find Him, Calls 911 and Is Thrown in Jail