Since you might have missed your latest copy of The Siberian Times, here’s a ansffkrbzi
story for you, perfect for a blizzard:

Little Saglana Salchak has spoken for the first time about her sad 6 hour trek through treacherous snow drifts with wolves around to get to a neighbour’s home from her grandparents’ remote farmstead.

Miserable at finding her 60 year old grandmother ‘cold’, she was sent to call for help by her grandfather Borbak who is totally blind. He did not realise the time he told her to make the walk: it was 5 am, a pitch dark.

The four year old took matches, which she could use to light a fire, and followed the tracks of a horse sled, partly on a frozen river, which she knew led to the neighbour’s home.

That she did. In a land where there are bears (hibernating) ad wolves (who aren’t). As a local explained:

“Tuva is crowded with wolves. They plague the cattle, and shepherds groan because of Â them. In the dark she could easily have stumbled on a pack….This girl was lucky that she did not meet them. Her only hope would have been to climb a tree.”

Okay, that is ALL amazing, But one bit of that amazingness is that while we worry when kids climb trees, Â elsewhere kids’ safety DEPENDS on them climbing trees.

Clearly this girl was extraordinary even by Siberian standards, or her story wouldn’t have made the papers. But she reminds us just how incredibly competent kids can be, even — maybe especially — when unsupervised.

This is knowledge we have lost just as surely as the knowledge of how to skin a bear, build a sleigh, or make a fire in the forest in the snow in the dark. 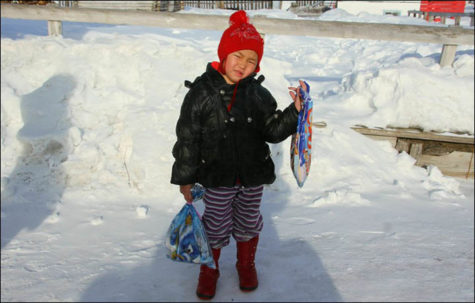 Saglana canÂ probably walk to school by herself, too. (Pictures reprinted from Siberian Times, which reprinted them fromÂ NTV, Yury Darbaa)

An Uber for Kids: Genius or the End of Childhood Freedom?
I Ran into the Store and Came Out to Find a Lady at My Car. Here’s Why:

24 Responses to Can a 4-Year-Old Walk to School? Or Walk 5 Miles in the Snow, In the Dark, in Siberian Winter, Lighting Fires When Necessary, to Fetch Help for Her Grandfather?