Years ago I went to a friend’s African-American church. The preacher told a story about the time he was running to catch the bus on Manhattan’s Central Park West — a beautiful avenue boasting our iconic park on one side, and million dollar condos on the other. As he sprinted up the street, a cop sprinted up behind him shouting.Â “Halt! What are you doing here?”

These were the days before Ferguson, and I was unaware of how common this was. But the churchgoers weren’t. They nodded along. They smiled ruefully. They’d all been there: Presumed guilty just for being black — and running — in a predominantly white neighborhood.

Which brings us to today’s story, of an “attempted zzdserkrth
teen luring”Â in Warren, NJ, last week. According to NJ.com:

At approximately 7:35 a.m., township police received a report that the teen was approached in his driveway by a man driving a grey 4-door sedan, possibly a Toyota or Nissan, according to a news release.

The man is described as light-brown skinned in his 50s wearing a light green-colored shirt, black jacket with eyeglasses and a thin mustache, it was stated in the release.

According to authorities, the man said to the student, “Your bus isn’t here, why don’t you get in my car?”

Well now it is a few days later and the whole story has come out. Turns out the guy’s kid had missed the bus and he was trying to locate it. He even had his kid WITH HIM in the car. You’d think that might make him look less like a stalker.

But no. Because he “stopped to ask the teen, who was waiting for the same bus, where the bus was at that point,” the teen immediately ran inside his home, presumably freaking out, and the cops were called.

“Driving while male” isn’t a trope yet. But considering the number of people who send me notices from their schools warning parents that, “An unfamiliar van drove by the bus stop today,” or, “An older man stopped some children to talk to them,” it may be soon. We are on red alert when it comes to any interaction between adult males — even teen males — and kids, even though stranger danger is the rarest of crimes. We are seeing the world through rape-colored glasses.

Police said it has been determined that the man “intended no harm” and the investigation into the incident has been closed.

Except that now one more incident is lodged in parents’ brains: A man stopped his car and asked a teen for help. Why do these terrible things keep happening??? No child is safe! – L 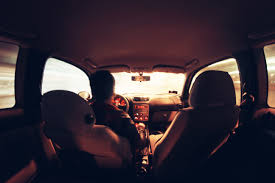 Oh no! A man driving a car! You know what THAT means!

Volkswagen Endorses Letting Kids Wait in the Car a Few Minutes! (I Think)
Shame on the Fear-mongering Washington Post