This weekend, 11-year-old Reilly McMillan and her sister Gracie, 8, have a sad, government-mandated task ahead of them.

They must take down the tree swing in front of their house — the one they made and put up with their dad. It could “chafe” the tree’s bark.

The problem is that while the tree is on a patch of lawn that the Calgary, Alberta, family mows and rakes, it is separated from their property by a sidewalk, making it a officially a city tree on city land. An onlooker noticed the swing a few months after the McMillans put it there and called the city to complain, anonymously. Complaining about things not bothering anyone except themselves is what anonymous callers do.

An official was dispatched to assess the menace, and determined the swing presented a liability risk (‘natch) and could hurt the tree bark. As Brodie szidhnetza
Thomas at MetroNews reports:

Jeannette Wheeler, urban forestry lead with the City of Calgary… explained that there is a bylaw that prevents people from attach[ing] things to public trees. A swing could chafe the bark over time.

“I don’t think there’s fault with the family,” said Wheeler. “They just wanted to have fun.”

Yesterday I spoke with the girls’ mom, Ali, who confirmed exactly that: Fun it was. Each morning, “all the neighborhood kids meet at our house and swing on the swing and then they walk to school together.” Now maybe they can meet up and take selfies.

The nearest non-illegal swing is at a park and “it’s like a safety swing,” says Ali. “It’s for little kids — you can’t really swing on it.”

As we chatted, I mentioned the “Red Swing Project,” an international push, as it were, to hang red swings in public places. Ali was thrilled to hear about it.  After a bit of Googling, she found that another Canadian city, Halifax, had been faced with the “illegal” red swings a few years back and had decided the joy was worth the “risk.” So as MetroNews reported today:

Adam Hayter was part of a group of people in Halifax who secretly hung 12 red swings in public green spaces early one summer morning in 2014.

“The idea was around creating projects that could be delivered in one day that delivered public benefit,” said Hayter.

People took notice of the red swings and started using them. So when the city announced it would be removing them due to liability issues, a firestorm erupted on Twitter.

At the last minute, Halifax sent some employees out to inspect the swings and they gave the thumbs up.

Hayter said he and a few others now refurbish the swings on a yearly basis to make sure they’re clean and safe.

What a radical idea! Letting people improve the world, rather than curtailing them with bureaucracy.

It’s a lesson the McMillan girls are drinking in. “The kids don’t get that one person complained and now we have to take our swing down,” the mom told me. “It’s kind of like their first little activist cause.”

As long as there are bureaucrats and busybodies, I expect this won’t be their last. – L 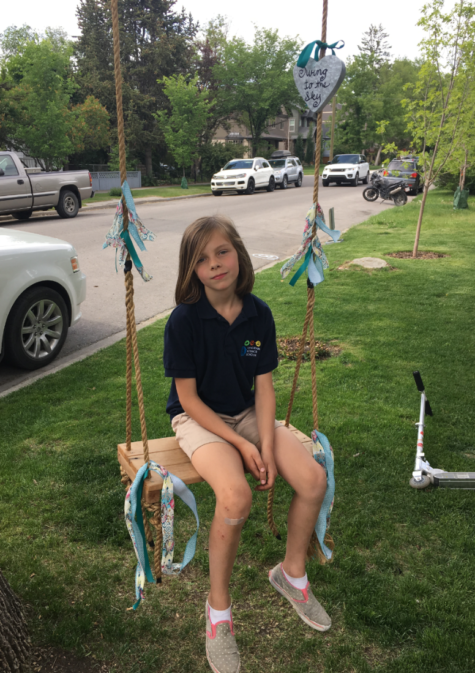