Readers btkedtyhsi
— A mom sent this to me after hearing my talk. (To book me, see my lenorespeaks.com page.) What I appreciate about this note is how hard it is to counter the constant fear Â we’ve been conditioned to feel, and how brave and bracing it is to start fighting back. – L.

You made me laugh a lot! You know IÂ heard ur story a few yrs ago then seen the episode of Law and order [which featured a 9 year old who looked just like my son] and you are right the media is to blame for our fear.Â  I have a 18 yr old daughter, and I’m definitely a mom that is so over protective.Â  I had such a free range childhood could leave the house and had to be home when the street lights came on.Â  Went to the corner store at 5 yrs oldÂ  bought my mom’s cigarettes and candy all the time.

I was probably 10 yrs old going to the beach with friends and no supervision.Â  Rode my bike half way across the city with friends no questions asked.Â Â  Now I’ve been a single parent since my daughter was 1 yrs old and had to make all the choices and decisions and was always afraid of making the wrong choice because my thought was what if something happens to her or what will everybody think about me and my decisions.

My poor child was about 10 before she was allowed to go around the block on her bike.Â  And never did I allow her to walk to the corner store till way after junior high like grade 7 or 8.
I’d let her go to the movies with friends as long as she had a ride there and home. She could go to the mall with friends,Â  andÂ  go to the park as long as there was a group.

I still ask her to txt me when she gets somewhere, all her friends drive and even have left for college.

I’m so nervous for when she leaves to go away for college, god she’ ll have sooo much freedom. I know I need to let go, and give her some space.Â  This yr was the first yr I left her over night by herself I was still in the city just like 15 min away staying over at my finacÃ¨e house we were having a party and everybody all our family and friends were there and she didn’t want to stay the night so I drove home and went in the house got her settled and left, she was 17 yrs oldÂ  and do you think I could sleep, nope worried all night but I never txtÂ  her, but I went home first thing to check on her she was fine.

Then Prom night, her 18th birthday it was a huge party camp out hundreds of teenagers,Â  partying, it was horrible night for me, Thought the worst, her getting drunk bunch of boys raping her, all her friends LeavingÂ  her behind her vomiting to death.Â  I made it though the night but worried myself sick,Â  all along she was having a blast with all her friends and first thing in the morning I got a call from her saying she’d be home soon.

We live in a world where there is so many possibilities for our children to get hurt or worse killed but she’s made it this far and barely a bruise I know I need to give her space and the confidence to make choices even though it’ll be hell on me.

Thanks for everything you were great! Gave me lots to think about.
SincerelyÂ  Melanie

The Law & Order actor and my son: 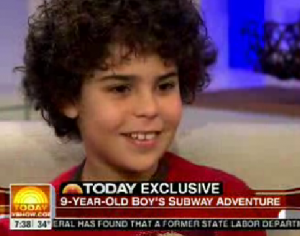 Izzy Skenazy, back when he rode the subway alone as a 9 year old.

The boy on the Law & Order episode I discuss in my speech. Hmmm.

Predators* Stay Out!
Peace and Joy and Self-Defense Lessons for Holiday Shoppers