Readers iffethehky
— I published this on Reason.com, hoping to get attention for this case. BUT once again, I do not want it scaring parents into quarantining their kids. I just want to spread the outrage, the way outrage spread in the wake of cops arresting Debra Harrell, the McDonald’s worker who let her 9-year-old play in the park. Once we get a groundswell of Americans on our side — the side that is against prosecuting parents who give their kids some independence — it will become normal (or at least a parent’s prerogative) to let kids walk to school and play outside again. That is my hope. I even think it is working — awareness seems way up. And so my piece begins:

Children’s book author Kari Anne Roy was recently visited by the Austin police and Child Protective Services for allowing her son Isaac, age 6, to do the unthinkable: Play outside, up her street, unsupervised.

He’d been out there for about 10 minutes when Roy’s doorbell rang. She opened it to find her son â€”and a woman she didn’t know.Â As Roy wrote on her blog HaikuMama last week, the mystery woman asked: “Is this your son?”

I nodded, still trying to figure out what was happening.

“He said this was his house. I brought him home.” She was wearing dark glasses. I couldn’t see her eyes, couldn’t gauge her expression.

“Yes. He was all the way down there, with no adult.” She motioned to a park bench about 150 yards from my house. A bench that is visible from my front porch. A bench where he had been playing with my 8-year-old daughter, and where he decided to stay and play when she brought our dog home from the walk they’d gone on.

“You brought him home… from playing outside?” I continued to be baffled.

And then the woman smiled condescendingly, explained that he was OUTSIDE. And he was ALONE. And she was RETURNING HIM SAFELY. To stay INSIDE. With an ADULT. I thanked her for her concern, quickly shut the door and tried to figure out what just happened.

What happened? The usual. A busybody saw that rarest of sightsâ€”a child playing outside without a security detailâ€”and wanted to teach his parents a lesson.

Read the rest here. And what I did not include in the Reason.com piece is that Â her son spent the first few years of his life in very dire medical straits. He even had a tracheostomy tube. So, as Roy told me, the idea of giving him a “normal” childhood was a DREAM of hers. Â How dare anyone threaten that? 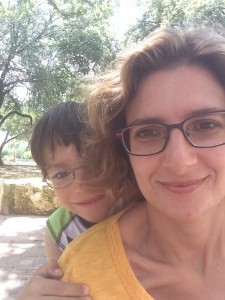 74 Responses to Cops and CPS Interrogate Mom Who Let 6 y.o. Play Outside