Readers ysyhekiknb
— The story below makes me so sad and so angry, and you will see why. If anyone at Child Protective Services or the police department would pick up a single book written before predator panic swept the country, they’d see that 6-year-olds were always part of the neighborhood scene, scampering, playing, or even — in many eras and areas — working! The idea that a 6-year-old can’t be outside without constant supervision is new and warped.

It also seriously underestimates kids.Â Is there a law requiring parents to stunt their children’s curiosity, competence, maturity and independence? I fear it may only be a matter of time. – L.Â

Dear Free-Range Kids: I’ve run across your site a few times and generally ascribe to the parenting principles that you write about. I’d like to anonymously share what just happened to my family with you and your readers to elicit some feedback.
Â
We’ve taught our six-year-old, whom I’ll call Emily, about crossing the street, reading maps, etc.Â Â As she’s learned these skills we’ve let her try them out, first with supervision, and then on her own, to make short trips around the neighborhood.Â Â We live in a fairly average residential neighborhood that has a mixture of stop signs, stop lights, and crosswalks.Â Â The state that we live in does not have any laws regarding a minimum age for a child to be unattended.
Â
Recently, Emily went by herself to a small store a few blocks away. When she was out a little longer than I expected, I went looking for her.Â Â The shopkeeper said that as she was walking out the door the police were coming in, asking if Â anyone there was her parent. Then they took her.

POLICE REFUSE TO LET HER GO

.
Once I got to the police station they would not release her to me for over 20 minutes, though she was sitting behind bullet-proof glass just 20 feet away.Â Â When the police finally came to talk to me, I was told that they had responded to a call of a young child being unsupervised.Â Â They refused to identify a reasonable cause for her detention, or even what law had been broken.Â Â They insisted that they were waiting for CPS to respond before they would let me see my daughter, but then they later came back and said that they were releasing me to her because CPS had told them to give her to me, since I was waiting for her.Â Â
.
I received a letter from CPS today.
Â
Emily knows her name, address, phone number, etc.Â Â Furthermore, the responding officer knows exactly who both Emily and I are since she responded to a complaint regarding Emily crossing the street by herself just a few days prior, during which we were detained for more than half an hour.Â Â After this previous incidentÂ Â her supervisor had confirmed that there was no law against a child crossing the street by themselves.
Â
So what say you Free-Rangers to the cops picking up a 6-year-old, not contacting the parents, and then refusing to give her back? – A Dad in Distress
.
Dear Dad: We say that this is not a matter for the cops or CPS. You are a responsible parent, and you are raising a responsible child. Â How dare these authorities suggest they care more about her than you do? Â – L. 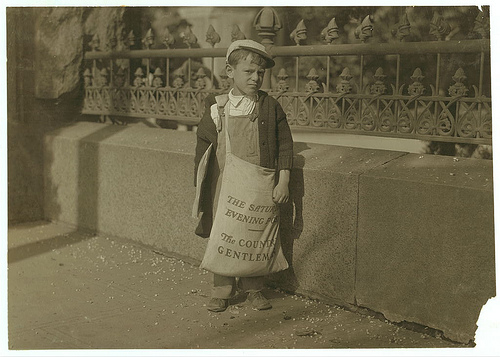