It is with dread and despair that I must tell you that a rytrihbyde
creepy clown has been spotted wandering around Green Bay, Wisconsin.

And you thought the idea of “Cheese Heads” was already disturbing. (Heads made OF cheese? Encased IN cheese?):

But, there’s not much police can do. The clown doesn’t appear armed or dangerous â€” just really creepy.

“This person is not breaking the law,”Â said CaptainÂ Kevin Warych of theÂ Green Bay Police Department. “He can walk in a clown costume anywhere he wants.”

That’s what wrong with America today! Creepy clowns have too many rights! The excellently reported article byÂ Ashley May in USA Today via WFAA reports:

The clown, who is being referred to asÂ Gags â€“ The Green Bay Clown,Â was first spotted at 2 a.m. Aug. 1, according to a fan Facebook page that popped up the next day.

Commenter Shannon Mueller said if she met Gags, she would “curl into the fetal position and die of heart exploding from pure terror.”

Anyway, it’s just the teensiest bit possible that Gags is, well, a publicity gag(s). But for what? He’s not saying. He’s just looking at us with those sad, hollow eyes.

It is with that image that I must leave you for the weekend. If you never recover, forgive me. I know that one creepy incident can ruin a person for life. That’s what so many of our laws are based on. – L. 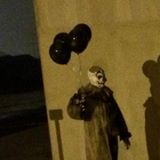 Brand New Fear! “Bounce Houses Too Hot” Says Study
Our Kids are NOT a Report Card on Our Parenting