Readers — Many of you have sentÂ this btttarsyta
story about Hawaii dad Robert Demond who made his son walk home a mile and was found guilty of endangering the welfare of a child. For this he was put on one year’s probation, and forced to taking a parenting class and pay a fine.

Demond told the judge that it was a common form of punishment when he was a kid and that he didnâ€™t see it as morally wrong or criminal. He had picked his son up from school and questioned him about a matter that came to his attention. When his son didnâ€™t respond, he stopped the vehicle and made him walk home to think about his actions.

These are different times, Watanabe said. It is understandable that you became upset with your son, but it is dangerous for children to walk along the highway, and there are predators out there, she said. The age of the child was not revealed in the course of the hearing and the Office of the Prosecuting Attorney would not divulge further information.

There are predators out there? So should kids never be outside without an adult? Is anyone who lets their kids out of their sight guilty of endangerment? While we’re at it: How are these “different times”? How does the fact that crime is at a FORTY YEAR LOW make walking home MORE dangerous than previous eras?

It’s true we don’t know the age of the child involved. But we do know the judge’s reasoning is that the world is particularly unsafe for children NOW. If that inaccurate perception becomes the standard of the courts, then nothing is safe enough and no parents can give their kids independence. — L 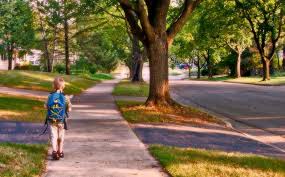