April 24, 2013
Hi dhezbysnbh
Readers — Â Here’s an example of our “Do something — anything!” school safety culture at work.Â Personally, I’d never heard of airsoft guns. Â When I Googled them, they looked totally scary and far too realistic for my tastes. BUT they are neither lethal nor, where this family lives, illegal. And, as you’ll read, none of the airsoft OR real guns mentioned here were going to be on school premises. But somehow, banning the experiments they were used in makes our middle school students safer. – L.Â
.
Dear Free-Range Kids:As a result of Sandy Hook, my 7th grader and 3 of his friends got disqualified from the school’s science fair because he and his partner used an airsoft gun and the other two used a real gun. Luckily, my child had no real interest in winning the science fair and going on to regionals and the disqualification did not affect his grade, but still…. IT WAS AN AIRSOFT GUN and a study on the pellet weight vs. backspin. We found out that he would not be qualified to be a competitor the Monday before judgingÂ on Thursday, and his project and the other were relegated to a separate area of the fair… the reject area, I suppose. He actually scored 102 on his project… had he not gotten the disqualification, he would have gone to regionals. Hows that for a knee jerk reaction????
.
As for the other kids’ project, I am not sure what the thesis of it was.Â  I believe they used a shotgun and shot through several different materials to see how they were penetrated.
.
In neither case was an actual airsoft gun or real gun included in the presentation.Â  I do not know if this was a school call or a state decision.Â  All I know is that these kids worked for half the school year on these projects and I was shocked when my son came home and said, “Oh, by the way mom, my project got disqualified.”Â  When I pelted him with questions…Â  well, he is a 13-year-old boy.Â  I got a bunch of Â “I dunno”s. Â Once I knew that it did nothing to his grade I didn’t pursue it further.
.
I really have the utmost respect for the administration of my childrens’ school.Â  I know that it is the crazy hypersensitive world that we live in today that makes decisions like this one happen.Â  If they had better options in the face of the tragedy at Newtown, I wholeheartedly believe they would have chosen those.Â  And I don’t really know if our administration or the state that made the final decision.Â  All I know is that it wasÂ theÂ decision that was made.Â I think that sometimes administration is forced to do things that look like solutions in order to make people who have been all jazzed up by the media feel better.Â  Better they do something that accomplishes nothing than nothing at all. Â – Mom of a Boy Not Going to Regionals
. 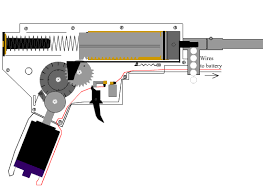 Should 13 year olds Not Be Allowed to Cross the Street by Themselves?
UPDATE! When Her 6-y.o. Didn’t Show Up at the Planned Spot