Readers byrhyfebiz
— Â Here’s hoping this piece from yesterday’s New York Times starts Â a trend: Talk to the stranger next to you and have a nice day. Really — you WILL have a nicer day:

If youâ€™ve ever been on a subway or public bus, you know the rules. Donâ€™t make eye contact, stay as far away from other people as the space allows, and for the love of God, donâ€™t talk to anyone. But what if the rules are wrong?

The behavioral scientistsÂ Nicholas Epley and Juliana SchroederÂ approached commuters in a Chicago area train station and asked them to break the rules. In return for a $5 Starbucks gift card, these commuters agreed to participate in a simple experiment during their train ride. One group was asked to talk to the stranger who sat down next to them on the train that morning. Other people were told to follow standard commuter norms, keeping to themselves. By the end of the train ride, commuters who talked to a stranger reported having a more positive experience than those who had sat in solitude.

Read the rest here. And instead of teaching our kids stranger danger let’s teach them how they can (and should) TALK to anyone. They just can’t go OFF with anyone. (Same advice I give in my book.) – L.Â 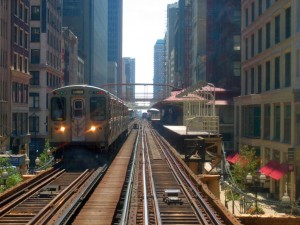 People who meet and talk to people are the happiest people in the world. Or at least on Chicago transit.

“I Don’t Want a Man Sitting Next to My Kids on a Plane”
Kids & Tech: No One Right Answer

26 Responses to Don’t Be a Stranger