This week, a jury in Manhattan found Pedro Hernandez guilty of murdering Etan Patz in 1979. As the rrkabkdfsy
New York Times reports:

Pedro Hernandez, a former bodega stock clerk who confessed to luring 6-year-old Etan Patz into a basement and attacking him, was found guilty on Tuesday of murder and kidnapping, a long-awaited step toward closure in a case that bedeviled investigators for decades and changed forever the way parents watched over their children.

A Manhattan jury convicted Mr. Hernandez on the ninth day of deliberations after the second of two lengthy trials that brought renewed attention to Etanâ€™s disappearance on May 25, 1979, as he walked to his school bus stop alone in SoHo for the first time.

The story of Etan is one that still comes up when parents, especially here in New York, explain why it feels too dangerous to send their kids outside, unsupervised. His death is used to justify not just the fear, but to reinforce the sickening comfort some take in thinking it was the parents’ fault: “THEY were lax, their CHILD paid the price. Anyone could have predicted it.” Which is why, after the hung jury in the Etan murder trial two years, ago I wrote:

Either way, it is this:

â€œWhat would you say to parents who are interested in letting their kids walk home from the park but are too nervous that their child might be the next Etan?â€

Parents afraid that their child might be the â€œnext Etanâ€ are understandably fearful, since we have been hearing about this case for 36 years. It is our New York catechism. We have been trained to reflexively picture the saddest possible fate â€” basically, Etanâ€™s â€” before we let our kids do anything on their own. I call this â€œworst-first thinkingâ€ â€” thinking up the worst case scenario first, and proceeding as if it is likely to happen.

It is depressing. It is paralyzing. But it isnâ€™t really keeping our kids any safer. Too see why, try this:

Imagine if, 36 years ago, a child â€” call him Frederick â€” had died falling down the stairs. It is a rare way to die, but it happens. Now imagine that Frederickâ€™s case had received inordinate media attention. Article after article. Television story after television story. â€œRemembering Frederickâ€ would be the headline on the cover of People magazine, and the name of a docudrama. But would it make sense for parents to feel heart-stopping fear every time their kids wanted to walk down the stairs?

Or to escort the kids down the stairs every time?

One terrible, tragic case that happened when a child was doing something that is generally very safe and normal should not change the way we go about everyday life.

And yet, along with some other high profile cases, it has — even though we are living at a time when the murder rate is back to what it was in 1965, when parents could let their kids go outside without anyone intoning, “But what if they never come home?”

This heart-stopping question does nothing to make kids safer. They are VERY safe walking down the stairs, and VERY safe waiting for the school bus. But they are not TOTALLY safe ever, anyplace.

So we can live in fear of very rare, very random events that we canâ€™t possibly predict in the course of everyday life. Or we can remember the best aphorism anyone ever sent to my blog: â€œAll the worry in the world doesnâ€™t prevent death. It prevents life.â€ 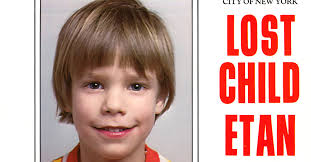 Etan Patz, a tragedy, not a “lesson for us all.”

Teen Girl Sends Teen Boy 5 Sexts. His Choice: 350 Years in Prison, or Lifetime Registered as “Violent Sex Offender”
You Don’t Have to Breastfeed Till Age Five to be “Free-Range”