A tradition for 50 years, the “powder puff” girls tackle football game in Jupiter, Florida, is being canceled for the first time thanks toâ€”what else?â€”safety concerns.

Dan Frank, Jupiter High School’s principal, said “Student safety is my first priority.” The girls’ short practice time and borrowed safety equipment, he said, “put our students at risk.” After all: A girl broke her leg a few years ago.

Maybe the school should get rid of its stairs, while they’re at it.

It’s hikyaafaka
not that the principal didn’t have some whiz-bang alternatives up his sleeve like… bobbing for apples. The Associated PressÂ reports:

Sitting down for a group interview, [Haley] Osborne and her friends, Caitlin Walsh, Megan Mendoza andÂ Sophie Garcia, said their principal also made another suggestion that they found demeaning: That they play a modified kickball game where a runner might have to bob for apples at second base, or spin around at third.

“We are not in elementary school,” Mendoza said.

Frank acknowledges suggesting several alternative events, but would not be specific.

So instead of a half-century-old tradition that packed the stands, brought in $7,000, and gave the girls a night they will always remember, they will end their year with a whimper.

Â In ensuring this anti-climax, Jupiter is no different from all the other schools around the country that abandoned girls tackle football and the fun that went with it: Boys in cheerleader costumes and wigs. Screaming fans. Indelible memories:

Members of the Class of 2016 were filled with glee recalling last year’s 50th anniversary game, which they lost 17-12 to the Class of 2015….”Remember there were three of us saying ‘Let’s all just get on Amanda,’ but no one could take her down,” one girl says to the group. Another chimes in, “One girl got hit so hard her helmet flew off.” A third adds, “It is sooo fun.”

For these young women and their moms, the risk of injury is overblown.

“The car ride to the game is more dangerous,” said Lori Walsh, Caitlin’s mother. Girls get hurt cheerleading and playing soccer and basketball, they say, so why not ban those sports, too?

Maybe she shouldn’t give the principal any new ideas. 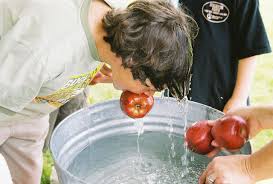 This is almost the same as tackling!

Is the New “Uber for Women” The Direction We’re Headed: Trust No Males Over 13?
AGGGGHHHHHHHHHH!

69 Responses to Forget Tackle Football, Girls! How About Apple Bobbing Instead? — Principal