September 18, 2013
Hi nisserrsys
Readers — I’m wondering whether folks somehow feel MORE Free-Range when they’re on vacation, and if so — how come? Is it because when we relax, we relax about danger, too? Or do we somehow trust other environments more than our own? Or is it only the confines of a Disney resort?
.
Anyway, this post comes to us from Michelle Rise, who describes herself as “a homemaker, mother of 5 who has had over 20 years of experience trekking through the Disney parks with her family.” She Tweets @Rise7Up. – L
.
GIVING KIDS FREEDOM WHEN TRAVELING by Michelle Rise
.
Let me start by stating I’m not always 100% Free-Range as a parent.  I often say no when it’s quite possible, upon reflection, I could have said yes.  Yes, you can cross the four lane highway to get ice cream.  I said no for years until I realized neighbors were allowing their kids to cross the same highway.  After all, the legal speed is 35 mph and there are crosswalks and lights at the particular intersection.  I didn’t need to be such a ninny.
.
The goal of most parents is to raise children eventually capable of taking care of and supporting themselves and their own families, I began to look for ways my kids could safely learn independence.  One was family trips to Florida to visit Walt Disney World.
.
Orlando is a pretty big city compared to the sleepy suburb where we live in Alabama.  We noticed though, how quickly our 6 year old son Leland learned his surroundings, not only in the theme parks but also the shuttle to and from Hawthorn Suites, where we were staying.  Take note that it is not on Disney property so this gave the added anxiety of another bus to navigate to and from the parks. Our 12 year old daughter, Leah, had no idea where she was and had we said Canada, she might have believed us.  But at 12, she wanted freedom to roam, although she would have preferred to do so with a friend rather than her brother.  The problem was this: One day, both kids weren’t ready to head back to the hotel when we were.   But baby brother, Luke, needed a nap.  Luke’s nap was our official excuse for going back early.
.
We thought about it a few minutes and decided if the two of them agreed to stay together, we would trust them to get back to the hotel from the Magic Kingdom after riding Space Mountain, Astro Orbiter and the Teacups.  We knew Leland could manage just fine and Leah was responsible enough to watch him.
.
We went back and worried some, but thankfully had the baby to distract us. Sure enough, about two hours later, Leah and Leland walked in beaming about their adventures.  Both proud and excited, Leah admitted she almost had the two of them get on the wrong bus but Leland corrected her and she (miraculously) listened.
.
Not only did it create a great memory, it cemented a sibling bond still very strong today.   I’m thoroughly convinced that allowing freedom is what gave Leah the confidence to become a worldwide traveler when only 18 years old and Leland the desire to see and do amazing things by joining the US Coast Guard. – M.R.
. 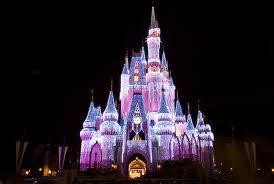 Did a small Free-Range experience at Disney change two kids…forever?

18 Responses to Free-Range at Disney World