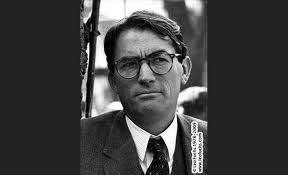 Readers — Below Â is a 1962 letter from the British Board of Film Censors to Gregory Peck, who starred as Atticus Finch in “To Kill a Mockingbird.” It’s fun to read, not just because it’s from before the world knew what a classic the movie would become, but because it’s Free-Range! Paragraph two reads:

“The theme is one which touches our work closely. [Remember — these are censors!] We feel that it is not only wrong but impossible to shield children completely from the wickedness of the world, and we feel that through seeing something of it they may discover good things as well. The children’s excited reaction to the madman who lived nearby and their eventual discovery that he was a kindly defective, is just the sort of thing that children should learn….”

Here here! (Or is it hear hear?) Either way, hooray for the idea that kids can and should be part of the real world, not just quarantined in supervised, sanitized, “age appropriate” activities. Curiosity — as well as some discomfort and fear — have always been part of growing up. How else can children come to realize that “strangers” are not all the boogeymen society makes them out to be? Boo! – L. 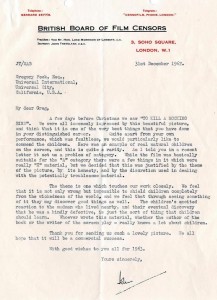 I know it’s hard to read this, so here’s the link.