Folks — This rnftriafsy
story (also reported here)Â is tragic: A 15-year-old streaked at a high school football game, learned he could end up classified as a “sex offender” for doing it, and then hanged himself.

I don’t like to run stories about suicides because we can never know all the reasons behind this saddest of endings. I am putting this one on the blog only because it highlights the absurd overreach of our sex offender laws, which corral the silly along with the evil and, just like zero tolerance policies, see no reason to make a distinction. One reader who sent me this story — Brian from Ridgewood, N.J. — wrote:

This is the natural consequence when schools stop teaching and start prosecuting.Â  Streaking at a football game is funny and should be punished.Â  A suspension for a couple days should take care of things.Â  But then the school ups the ante and threatens legal action, maybe the sex offender registry.Â  You know, being naked means he is a sexual offender and he should be punished like a rapist.Â  The ramifications hit and the kid commits suicide.

When schools abdicate their responsibility to TEACH kids and instead punish them for juvenile acts, they cause unspeakable harms.Â  The result here means this was a troubled kid.Â  Schools should help kids, investigate root causes and teach consequences, not ruin lives before they start. 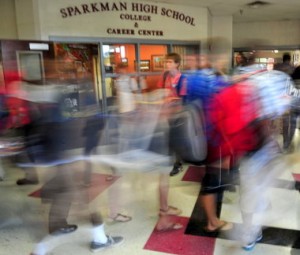 Your Wacky Answers to “Why Is The Gov’t Destroying Stamps that Show Kids Playing?”
The Problem with “Trunk or Treat”

89 Responses to From Streaking to Possible Sex Offender to Tragedy