Readers tiesyfhbfe
— I love this article from The Daily Telegraph by radio broadcaster Jason Morrison and hope that it’ll clear something up: While it is good to be aware of the possibility of horrors like abuse and kidnapping, it is sickening (and statistically ridiculous) to jump to these assumptions IMMEDIATELY upon simply seeing a man with a child. In this particular case, Jason took his son to the playground:

…Charlie had a great time, laughing and playing with the other kids. I was inside the fence that surrounded the play equipment keeping watch.

But that was apparently my crime. I hadn’t noticed at the time but a group of women had become suspicious of my presence. One of them, quite assertively, walked over. “Are you here with one of the children?” she asked. The look on her face suggested this was not small talk.

I was lost for words and nervously laughed, pointing at my 22-month-old. That wasn’t enough. She needed proof. Demandingly she asked, “Which one?”.

In the shock of it all, I can’t remember how I responded other than walking over and grabbing my son to convince her. Thankfully he responded.

I could feel the embarrassment building and so could she as she insisted, “I was just checking ‘cos it just seemed strange”.

I will be delighted once it seems strange to assume a man is a predator until proven otherwise. In a Facebook chat about this story, many of the comments were great. But then there’s:

Â Why are most people getting a bruised ego over this?Seriously…it’s not about sexism, it’s not about labels and it’s certainly isn’t about adults.It it about safeguarding children…

How is distrusting half the population safeguarding anyone? Really — how? L. 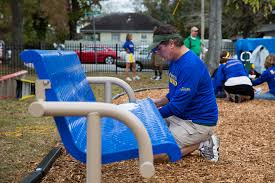 Oh no! Is that what I THINK it is?

“Why Are You Doing That to Your Child???” (I.e., Making Her Walk)
What New Thing Will We Find Harmful to Children Next?

56 Responses to Giving Men the Benefit of the (Predator) Doubt