Canada’s rezisssabr
national paper, The Globe and Mail, just came out with a big, blazing, bad-ass defense of everything we are fighting for. It specifically said:

Free-Range Parenting may not be everyone’s cup of tea, but practising it should not demand state intervention.

If that’s not legitimacy, what is?

The piece was prompted byÂ the case of a British Columbia dad who taught his kids, ages 11, 9, 8 and 7 to ride the bus.Â A busybody assumed this wasn’t safe and called Child Protective Services. CPS found the dad, Adrian Crook, exemplary.Â BUT it also ruled that kids under age 10 are not allowed on their own “in the community, at home, or on transit.” This prompted the Globe and Mail to say:

We are becoming a nation of censorious busybodies and scaredy-cats bent on inhibiting not just personal choice but the very notion of parental and child agency. The enterprise is being empowered by overbearing government policy.
.

Telling the dad his kids need constant adult oversight is a “terrible precedent.Â And we’re all to blame for it.” But if we could just get back to believing kids can be fine outside on their own, they way most of US were, “child welfare organizations won’t freak out.”Â
Â

Unfortunately, Canadians and their governments are increasingly adopting an extreme and absurdly narrow view of child welfare.Â It imagines that every moment unwatched by adults is a moment of looming danger, and that such moments must be eliminated. This mindset has taken over gradually, progressing step by small step, always professing the best of intentions…
Â .
The state, however, should be capable of looking out for kids while maintaining some sense of perspective, and not confusing “life” with “neglect.”Â …Â
Â .
A society where children can go outside, unsupervised, and where they are encouraged to do so, is a healthy and safe society.

Which is why towns and states that want to prevent government intrusion into decent parenting decisions should consider passing some version of the Free-Range Kids & Parents Bill of Rights: “Our kids have the right to some unsupervised time, and we have the right to give it to them without getting arrested.”

The goal of overthrowing the culture of overprotection is one I share with not just the Globe and Mail, but with a group of thought leaders here in the States, with whom I am starting a new non-profit to super-size the goals of Free-Range Kids. We’ll make a formal announcement soon, but safe to say this morning we are just savoring the Globe and Mail.

And trying to figure out how to get all that on a t-shirt. Â – L 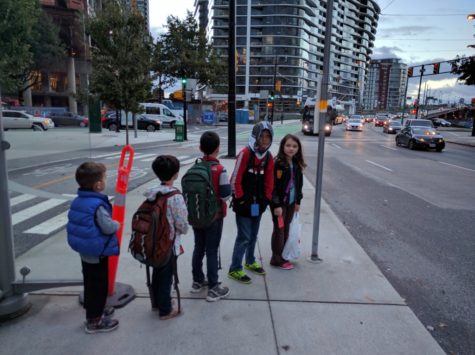 Should they all be back inside? Or in a car? Or maybe in a bubble? (Photo of Adrian Crook’s kids from his blog, 5kids1condo)

As Irma Bears Down, One Group Gets No Shelter
What Happens When a 10-Year-Old Reads Her Mom’s Copy of Free-Range Kids?

39 Responses to Globe and Mail Tells Government to Back Off and Let Parents Free-Range!