Readers rhdfaydrfn
— I am really sick ofÂ “Good Samaritans” who are actually smug, judgmental crazy cases who imagine terrible things happening to children ANY time the Â parents are not looking straight at them every single second of every single day.

Dear Free-Range Kids:Â  I consider myself a happy medium between Free-Range and helicopter. Due to having a son with autism and a son with life-threatening food allergies I cannot always be as Free-Range as I want to be. That being said I still had a run in with a â€œconcerned citizenâ€ a few months ago.Â  I just thought I should write Lenore about this.

My 6-year-old twin boys and I were finishing up a trip to Walmart on a Sunday morning after church. My routine is I unlock the car doors and the boys get in the car themselves and buckle up and wait for me to finish loading the groceries into the trunk and then I go return the cart. It is very rude and dangerous to leave a cart sitting out so I always return it to the nearest cart corral when I am done. This was about one lane over but definitely not more than two lanes over if I remember correctly. I could still see my car.

The boys had shut the car doors after they got in and it was a hot day but again they were 6, so old enough to get out of the car if theyÂ  needed to and I was literally gone maybe 1 minute while I returned the cart a lane over. When I walked back to the car a lady was standing in the parking space facing our car and looking at my car.Â  She remarked as I started to get into the car, â€œOh I am glad to see you.â€Â  I just looked at her and she goes on to say, â€œI thought someone left those kids in the car.â€ I replied â€œSomeone had to return the cart.â€ Then proceeded to get into my car and leave.

The thing was, she was still standing there staring at us as I pulled away. I wondered if that was because she had gone as far as to call the police or the store that quickly to report it.Â  I would be the type to be concerned if I saw a young baby or toddler in a car on a hot day but not 6-year-olds, and not when the mother was just walking a lane over to return a cart and in sight of the car. If she had even looked around she would have seen a woman returning a cart and could think, â€œOh that must be the mother returning the cart.â€ Then waiting to make sure before she left. I also would not think to make a comment about it to the mother. I got the sense the woman was expecting me to thank her or something but I was a little irked by the assumption I was neglecting my children. I certainly did not think she needed to be thanked. â€” April S

Lenore here: Nor do I. I think she was standing there because she was waiting for a halo. 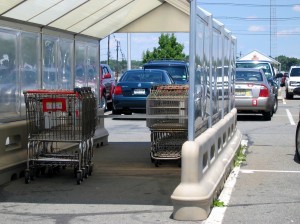 Is it okay to leave kids “alone” for the entire time it Â takes to return a shopping cart?!

47 Responses to Good Samaritan or Smug Busybody in a Parking Lot?