Readers enrryzbdan
— As the mom of two Scouts (of the boy variety), I am so sorry to see some troops turning into a morass of red tape, Worst-First thinking and CYA. Time to whittle down the fears! – L.

Dear Free-Range Kids: I thought I wouldn’t ever do this, but I think I’m going to have to.  I am easing my daughter out of Girl Scouts.A friend of mine, a former GS leader, assures me that this is the local group being buffleheaded, not national rules.  But practically speaking, it doesn’t matter.  It’s the local group or no Girl Scouts at all, due to our location.Around Christmas, I had a dispute with my daughter’s troop leader about letting her walk alone to the pickup point for a caroling excursion, which was just around the corner and across the street.  She said I had to drag the younger siblings out of the house and through the chilly winter weather — seeing as how they really are too young to stay home alone — while I personally walked my eldest to the pickup point.  Or  I could tell my husband that he had to let me have the car for the day instead of using it for work-related trips.  Reason? “Safety.”  Although I held on to my temper (I think), I got the feeling that this person was completely willing to call the cops or CPS or something if I let my eldest walk alone for five whole minutes, so I was willing to give in.  And then the whole thing got weathered out.  Bullet dodged.A few weeks ago, my daughter’s troop had a meet-up at a store a block from our house.  I told my daughter to courteously ask whether she could walk home on her own, and if not, to call me.  She ended up calling me.  “Safety.”Last night my daughter had a meeting in an elementary school building.  They dropped their coats in the cafeteria, then went to a small classroom just down the hall.  When my daughter was done with the activity, she wanted to wait in the cafeteria for me to come in and get her.  Not allowed.  “Safety.”

The cherry on the sundae of stupid: Apparently, this whole time she has been forced to take a bathroom buddy to the restroom whenever she needs to go!  All of the girls have to do this, it isn’t just her being picked on.  What.  The.  Frack. She’s 9.

The local Salvation Army runs a scouting program that does none of this nonsense and seems awesome. Hopefully I’ll be able to ease my daughter out of GS for “logistical” reasons.  I don’t want her memories of Scouts to be bitter . (Heh.) – Scout Mom for the Time Being 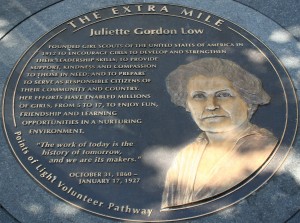 A Sensible, Helpful Response to a Tragedy
Obeying Protocol, School Keeps Girl Outside in -5 Degrees in Wet Bathing Suit