This nhdrsbayni
Fox 59 WXIN ad is so classic it belongs in the Fearmongering Hall of Fame…or maybe on The Simpsons. I so wish I could find the embed code, but I can’t. (Can anyone? Please send!) In any event, here’s theÂ transcript.

Imagine dirge like music and out-of-focus pictures of kids playing (which happens to be my other bugaboo. As if showing the faces of frolicking kids automatically puts them in grave danger!):

SCARY ANNOUNCER: And your child could fall victim when you least expect it.

CONCERNED MOM AGAIN: I knew immediately we needed to get to the E.R.

SCARY ANNOUNCER: Why doctors are now seeing more cases than ever before.

KINDLY DOCTOR: We always want to protect our kids.

SCARY ANNOUNCER: Keeping your kids safe from this playground danger, tonight, on Fox 59 News at 10.

Remember that great line by Â Ellen DeGeneres? â€œIt could be the most deadly thing in the world, and you may be having it for dinner. Weâ€™ll tell you what it is tonight at 11.â€

Anyway, you will love the comments on the ad, which Â sound like Free-Range has taken Indianapolis by storm:

For gods sake do a news piece about the dangers of obesity and diabetes from inactivity. The playground is part of the solution, not the problem!

Oh for goodness sake..if you can’t find something worth reporting on, put time in for vacation time..REALLY..the only thing you could possibly come up with is a playground issue?

Â
You can find danger in everything if you look hard enough. A police officer stopped my son from climbing a tree, now it was just outside a Starbucks, but still.
Â
How the hell did the world get this far? Is it more dangerous than it used to be for kids? Idiots
.
Must be sweeps week….hahaha…. bring back the teeth in the peanut sandwich meth mouth story instead!!!
.
I was hoping this was satire… but no, sadly it isn’t. What is wrong with people???? Stick your fragile egg-child in a bubble with some educational television and healthy snacks and leave the rest of us normal people alone…

I would love to see that teeth-in-sandwich piece! (I think. Or maybe not.)
Â .
But meanwhile: Tim Gill, the thought leader over in Britain who worries about the same things as I do,Â noted on his blog Rethinking ChildhoodÂ that the fearmongering piece is probably based on a new study that came out showing that playground concussions (but no other playground injuries) are up.
.
Hmm. The study’s conclusions are surprising, at best. With outdoor playtime going down, how come concussions (also known as TBIs — “traumatic brain injuries”) are suddenly on the rise? Especially after going DOWN for a few years? The folks who stand to make oodles of money by re-surfacing playgrounds have been keen on scaring parents (and park districts) into believing that kids are wildly unsafe on the current surfaces. and indeed, that is the concussion — sorry, conclusionÂ –of the study. Wrote Tim:

.
The authors conclude that â€œstrategies to reduce the incidence and severity of TBIs sustained on playgrounds are needed.â€ They state that strategies could â€œaddress design, surfacing, and maintenance.â€ They also point to â€œappropriate supervision and child behavior modificationâ€ as possible responses.

But what kind of danger are we really talking about? Tim crunched the numbers and concluded:

They mean that a city with a total population of around 700,000 â€“ about the size of Memphis, Tennessee â€“ would expect to see one hospital admission each year due to a playground-related TBI.

That doesn’t strike me as an epidemic.
Â .
What’s more, a study in Ontario found that playground spills accounted for just 4% of emergency room visits. That’s below soccer, skating, baseball…Â Really, before we go ripping up every single playground and paying millions upon millions for resurfacing, it looks like we should stop kids from playing any sports, ever.
.
As Tim concluded in a note to me: 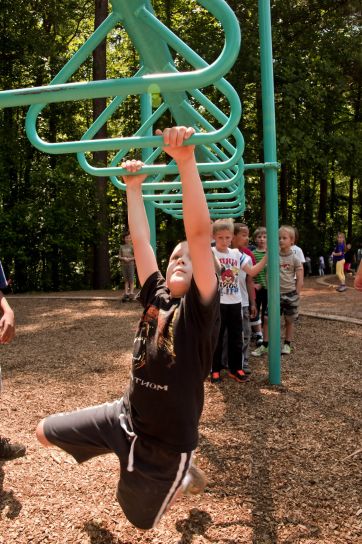 51 Responses to Gotta Love TV News: “Playground Fun Could Lead to Tragedy — Tune In at 10!”