Research presented at a meeting of the Pediatric Academic Societies this month warns of a grave threat to America’s children: Grandma and Grandpa. The study suggests older people are so hopelessly out of date on child-rearing recommendations that they may put their beloved grandchildren at risk.

Of 636 grandparents surveyed, nearly a quarter didn’t know that babies are supposed to be put to sleep on their backs. “We shouldn’t assume that just because they’ve raised a child before, they’re experts,” Andrew Adesman, who led the research, told CNN.

Except—big irikznttsr
except!—you don’t need to be an “expert” to raise a child. If you did, there would be no Kardashians. Children are hearty creatures, built to withstand Siberian winters, steaming jungles and even American suburbs. Besides, the “best” advice changes—and only sometimes because doctors have finally figured things out. Allergies to peanuts quadrupled as parents were advised not to feed them to young children.

It’s true that some grandparents don’t know the latest advice to keep a baby’s sleeping area free of stuffed animals and blankets to prevent sudden infant death syndrome. What grandparents do know, something many parents forget, is that putting a teddy bear in a crib isn’t daredevil behavior. “You’re talking about a minute fraction of risk,” says Hara Marano, author of “A Nation of Wimps” and a grandma. “The point is that no risk seems to be acceptable.”

A few years ago I met a delightful grandmother who was helping her daughter find a nanny. I suggested the one who’d helped raise my sons. “She’s smart, warm, incredibly caring—” The grandma cut me off. “How long since she has taken care of an infant?” About five years, I said. The grandma sighed: “Sorry, no. My daughter only wants someone with recent experience, because so much has changed.” We both raised our eyebrows and left it at that.

Today’s parents seem to believe nothing is safe enough for their kids. Dr. Adesman’s research has given them more ammunition. As one mom wrote at the august publication Parents: “Although sometimes I feel like I’m nagging my parents with the multitude of instructions I offer up before I leave them in charge of my kids, this research serves as a good reminder that you can never be too detailed!” Her advice for dealing with oldsters? “Use a gentle tone instead of lecturing them.” Yeah—and duck.

Slavish devotion to up-to-the-nanosecond advice sells scads of “What to Expect When You’re Expecting Everything to Kill Your Kid”—or whatever the latest baby bible is titled. Yet it ignores the real-world wisdom of grandparents (and nannies).

When one of my sons was a couple of months old, my mother-in-law gave him a piece of cantaloupe to suck on. I practically slapped it out of her hand: “Solid food?! Are you crazy?!” I was sure he wasn’t ready. The boy, happily gumming the fruit, was pretty sure he was. So was my mother-in-law, who had raised three wonderful children with her blind husband.

Sometimes the best practice is to go with what works. Especially if Grandma is willing to babysit.

(This piece of mine originally appeared in The Wall Street Journal) 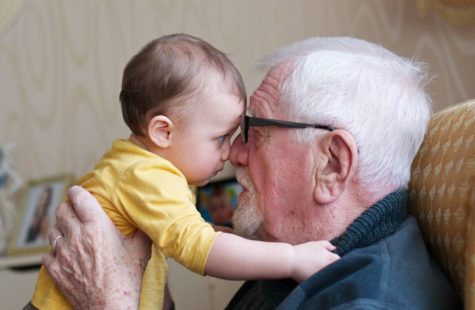 My, what mid-century ideas you have about childhood, grandpa!

Mom Late for School Pick-Up is Terrified her Son Will Feel She Doesn’t Love Him
Cat and Nat and #MomTruths Friday — ’80s Moms Had it Made!

52 Responses to Grandparents are Not a “Risk” to Kids Just Because They Aren’t Up to Date On Latest Research!