Readers — Here’s a long blog kzenzrndkr
post by a mom whose husband left Walmart with their daughter while she finished checking out. The greeter assumed the father was an abductor even after she — the greeter — followed the duo out to the car and asked the girl, “Who is this man Â with you, sweetie?” and the girl replied, “He’s my dad!”

That wasn’t enough for Sherlock, who took down the car’s license plate and called it in to the cops. The cops later arrived at the family’s home.

We pick up at the point where the writer/wife, author Jen Mann, has just found out about the incident when she gets to the car a few minutes after her husband and kid:

“Did she apologize or say why she stopped you?” I asked.

“No. Not at all. She was like staring me down. I could tell she still didn’t believe Adolpha even though she told her I was her dad. The lady was basically accusing me of kidnapping Adolpha, which I wasn’t. So I laughed at her.”

“Hmm. It’s a strange story, that’s for sure,” I said. “But you know what? I appreciate her vigilance. I want to go in and thank her. I want to tell her she’s wrong, but I want to thank her, because if Adolpha was being stolen, I’d be happy that she tried to intervene.”

“I don’t think that’s right,” the Hubs said. “There was nothing good about what she was doing. She came after me because she saw a person of color leaving the store with a child that looks like she could be white. I was racially profiled. Have you ever been stopped with our bi-racial kids? Has anyone ever accused you of stealing them? This woman came after me because I’m Asian.”

After some back and forth I decided not to go in the store and talk to the woman. The Hubs was pretty upset and I knew it would bother him more if I went in to talk to her. It wasn’t worth the fight. I figured that was the end of that. –

Read the rest here! And while we’re at it, here’s a link to Jen’s book, “People I Want to Punch in the Throat: Competitive Crafters, Drop-Off Zealots and Other Suburban Scourges.”Â She’s a feisty one! – L.Â 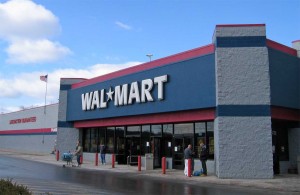 “Thank you for shopping at Walmart, you disgusting pervert.”