1 – I have never been camping. That’s right. Free-Range through and through, I never slept in a tent, camper or RV. (And for all I know, a camper IS an RV.)

2 – I never had any desire, but Go anfraadfdz
RVing offered me a free camper for a week, and when I told my family they said, “YES!!!!!!” which meant my meek and measly, “Really? Aren’t they big and tacky and gas guzzling and…” was drowned out by enthusiasm.

Fast forward to here at the Melville Pond Campground in Portsmouth, RI, where we just spent the night. Our very first.

A night that already had my husband and I walking through the camp trying to decide which RV we’d want some day.

That’s because suddenly we are literally nestled in the forest. (And I say nestled — and literally — because we are such city slickers we had to ask some very sweet guy walking by to jump into the driver’s seat and back our giant camper into its tree-lined space. This was after we’d already gotten stuck on our way into the campground, somehow sidling up so close to the “DUMP HERE!” sign that it had to be unscrewed and taken down for us, or it would scrape the RV. And that time, too, a very nice guy walking by jumped in and backed it up for us.) (Are you getting the idea that our RV is huge — a Jayco Greyhawk — and we are New Yorkers used to living in apartments smaller than the one we’re now driving across New England?)

Anyway, seeing all these tricked out campers — a tent attached here, a string of Christmas lights there — and campfires surrounded by folks  talking and laughing under the trees,under the skies,  it felt a little like fairyland. A very American fairyland, of course — electricity hookups pumping plenty of AC and juice for the TV. But here were all the things I like: People coming together, kids and adults, sharing food and stories. “They’re having fun,” I said to my husband.

“They’re having beer,” he replied. (Something I’d forgotten to bring. Will rectify soon.)

As for our kids — 15, 17, and a 15- year-old boy who joined us — they ended up reading, texting (so it goes), playing ball, playing cards.  They also ate almost all the food I expected to last for five days.

It’s morning now and they’re still alseep. Outside, it’s drizzly, but folks are grilling their bacon and boiling coffee. Lumberjacks, pioneers, Girl Scouts, Boy Scouts and our in-laws who kept raving about how much fun camping is  — we are one with them now.

We are taking to the American road like Kerouac himself…except for the fact we’ve got WiFi and a microwave. (And did I mention the indoor shower?) – L 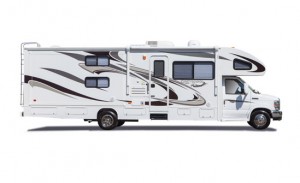 Our little home on the prairie.

Does Your School Ban Tag, Too?
Frog and Road (More RV Tales!)