OnÂ Good dyksynstay
Morning America last week, a spokesman for the National Center for Missing and Exploited Children — the people who put the missing kids’ pictures on the milk cartons without bothering to explain that the vast majority were runaways or taken in custody disputes, not nabbed by predators — told parents NOT to teach their kids stranger danger.

And actually, NCMEC told me that, too, when I interviewed them for my book — I quote them. But it always felt like they were talking out of both sides of their mouth, because when they were interviewed by OTHER sources, they kept warning about all the danger out there.

Dr. Marty Klein, whoseÂ Sex, Culture and Intelligence blog’s motto is “Changing the Way People, Politics & the Media Look at Sex,” did the heavy lifting on why this late-date “Don’t demonize strangers” statement seems both welcome AND hypocritical:

Yesterday, Callahan Walsh of NCMECâ€”The National Center for Missing and Exploited Childrenâ€”appeared on Good Morning America to urge parents to stop using the phrase â€œstranger dangerâ€â€”the phrase that NCMEC itself popularized for decades. They rightly notedâ€”finallyâ€”that most child sexual exploitation is from someone known to the child, not a stranger.

For decades, NCMEC has told parents to fear â€œstranger danger,â€ and instructed them to transmit this fear to their kids. They even got the phrase institutionalized in elementary schools.

NCMEC has been one of the single biggest drivers of parentsâ€™ fear in our lifetime. By conflating â€œmissingâ€ and â€œexploited,â€ they have panicked Americans into thinking the average child is â€œat riskâ€ of being kidnapped. By talking about â€œchildrenâ€ they conflate the experiences of five-year-olds and 17-year-olds. According to their own website, over 90% of â€œmissingâ€ teens are not â€œmissing,â€ they have run away. Some are no doubt living on the street and risking their health and lives, but they have not been kidnapped. In fact, over 3/4 of runaways are running away from institutions like foster homes and other social services.

And in a note that should calm some of the folks afraid that their children will be snatched by sex traffickers at Ikea or the grocery store, Klein parsed the gulf between our fears of trafficking and the still sad, but less ubiquitous reality:

This is a point Elizabeth Nolan Brown makes repeatedly — see this investigative piece of hers in Reason (a magazine I also write for). While we’re at it, read this piece of hers from last week: “Enough Stranger Danger! Children Rarely Abducted by Those They Don’t Know.”

As Dr. Klein explains, NCMEC was born in real, undeniable grief. But along with its mission to save kids from a terrible and terribly rare fate, it exaggerated the likelihood of abduction. (For a great book on this, read Joel Best’s “Threatened Children: Rhetoric and Concern About Child Victims):

Created by a few agonized people who had been devastated by violence against their children, NCMECâ€™s initial shocking message was (and still is), â€œYou could be us,â€ creating an atmosphere of fear, rage, and moral panic completely disproportionate to the actual danger. Yesterday on TV, they encouraged parents to ignore what they used to say, and to use different, more sophisticated words. But their fundamental messageâ€”that parents should be scared, that predators lurk everywhereâ€”remains the same.

In revoking their position on â€œstranger danger,â€ NCMEC still doesnâ€™t tell the key truthâ€”that the rate of kids being molested is NOT increasing (so says the FBI).

And while even a single missing child is too many, it isnâ€™t even a fraction as many as NCMEC invites you to believe.

How many kids are kidnapped each yearâ€”150,000? 50,000? The fine print on NCMECâ€™s own website says the number is less than 1,400â€”of which over 1,000 are abductions by the childâ€™s own family member. There are about 200 stranger kidnappings in the U.S. every year. Â Your kid is more likely to get killed by lightning.

And yet by manipulating and reinforcing our deepest fears, NCMEC has entrenched itself as a political player getting significant government funding.

So good riddance to the fear of â€œstranger danger.â€ But donâ€™t hold your breath waiting for NCMEC to apologize. Perhaps they could atone by encouraging parents to pay attention to the biggest danger that kids actually faceâ€”texting while riding their bikes.

I so agree that the safety messages that should take priority are: Look both ways before crossing the street. Put down that device while moving. Wear your seatbelt.

And I have even better news than Klein. The latest number we have for stranger kidnappings is 105/year, not 200. Still too many. Still not the 50,000/year NCMEC used to claim in Congressional hearings. (And for a good piece on how the number 50,000 is the “Goldilocks number” — big enough to scare people, but not SO big that it gets dismissed as implausible — here’s a story from NPR.)

Okay. Enough with the links. Next week I will try to post about the other problem with the Good Morning America “parent calming” piece. (Hint: It won’t calm anyone.) – L 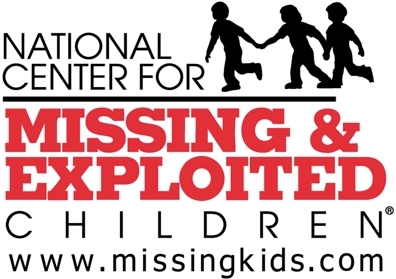 If the organization is serious about dialing back the stranger danger, maybe it’s time to change their logo, which makes it look like small children are fleeing the bad man.

Breastfeeding Is Not The Only Decent Way to Feed a Child
$1000 Fine or YEAR in Jail For Letting Kid Wait in Car 6 Minutes? Rhode Island, Defeat This Law!