Hi zyhhntktyy
Readers — Here’s a piece of mine that ran in The Wall Street Journal. Woof! (Doggie for, “Enjoy!”) – L.

“All dogs must be constantly supervised in their yards for their safety. Dogs of any size can scale fences within minutes of an owner’s inattention. Physical fencing is not a guarantee of safety, because . . . animals such as bats, bees and snakes can gain access to yards. [Our agency] recommends checking on the condition of fencing and digging/jumping deterrents on a regular basis, securing all gates with locks, and installing outdoor floodlights to illuminate the entire yard.”

Excuse meâ€”no dog can be outside in a fenced-in yard these days without a human being standing guard? Didn’t guarding used to be the dog’s job?

And how about this fear of bats swooping in on poor Fido? Maybe Hartz makes a flea, tick and bat collar that’s laced with garlic, just in case.

And floodlights? Are we talking about keeping tabs on a dog or Bernie Madoff?

Ah, but that’s exactly the idea: constant surveillance. The only safe pet is a pet that’s watched and worried over. You’ve heard of helicopter parents? Welcome to helicopter pet-owners.

Kristen Stelzer, a civil engineer who lives near Washington, D.C., recently told me about going with her husband to adopt a dog. During the application process, she happened to mention that they looked forward to the fun of taking the pooch to a dog park. The agency interviewer was appalled. “She was very anti-dog park,” Ms. Stelzer recalled. “She said some of the other dog owners ‘will not control their dogs.’ ” In other words, dog park = poorly supervised playdate. Tsk, tsk.

The rest of the application process didn’t go so smoothly for Ms. Stelzer either. Handed a 50-question form, she had to secretly Google some answers. “Like, ‘How do dogs get heartworm?’ I don’t know. I just give my dog a heartworm pill once a month.”

Then, even though she listed all the vets she’d used for the past 15 yearsâ€”yes, another requirementâ€”the application was rejected. She suspects that it was because she didn’t promise to cheerfully go bankrupt if the pet needed extensive medical care.

Three months later, the dog that the Stelzers wanted to adopt was still awaiting rescue by a more perfect owner.

If you think adopting a cat is easier, it isâ€”but only slightly. The cat-adoption application was three pages when a friend of mine decided that she wanted a kitten. It required her to list the name of her employer; indicate whether she owns houseplants; supply two references; and, oddly, reveal whether or not she owns a washer/dryer. (That one stumped us both.)

The application also listed the brands of food the cat should be fed. You will not be surprised to learn that only expensive “all natural” cat food would suffice. I’m sure it’s great stuff, if you can afford it without being reduced to eating cat food yourself. But plenty of cats have spent their livesâ€”maybe even nine of themâ€”eating Purina, and they still purr gratefully. That doesn’t matter to the adoption agencies, because another hallmark of helicoptering over pets or kids is the belief that if everything isn’t the very best of the best, especially when it comes to food, you’re basically poisoning Precious.

Just as with helicopter parents, the over-careful pet owner is also expected to worry ceaselessly about one matter above all others: abduction. I’ve seen an animal-control website that devotes a page to how to avoid canine kidnapping. I won’t give you the Web addressÂ becauseÂ you don’t need it. The site suggests that dog owners vary the times that they let the dog into the yard. Tell that to the mutt who’s really gotta go.

No one is watching your dog through binoculars, clocking his movements and peppering a T-bone with knockout drugs. This kind of predator paranoia is the same reason parents don’t let their human progeny go outside anymore, even though the U.S. crime rate keeps plummeting. The fear does not match the facts, and the fear is winning. The result? Kids, and now pets, hovered over, fenced in and floodlit. It’s like they’re at Leavenworth. In 2012 America, that’s considered good parenting, no matter the species. 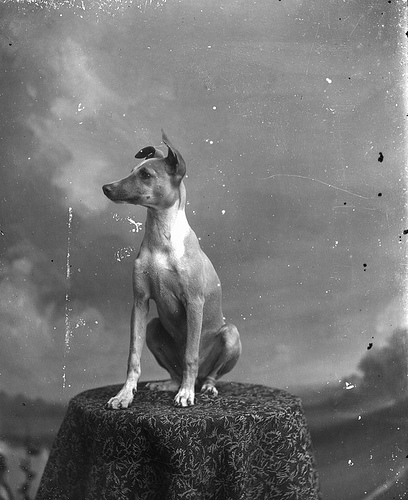 I’m adorable, but I do not need constant supervision.

Don’t Give Your Kids the House Keys Till They’re 16?
“How to Protect Your Family from Social Media” — As If It’s the Flu