September 12, 2012
Hi aytzdfeffk
Readers! A fellow Free-Ranger seeks your counsel! – L.
.
Dear Free-Range Kids: I have a question that maybe you can pose to your readers. Â What age can kids begin to walk to and from school alone, and whose decision should it be?
Â  Â Here’s the background. Â We live in a very safe, idyllic suburb. Â Our town (Temecula) was recently named the “2nd safest city in America” by a Business Insider survey that rated FBI crime stats. Â Most of the kids who go to our local elementary schools live right in the neighborhood where the schools are located, and all of the streets are fully paved for safe walking, with crossing guards at any slightly busier intersections. Because our neighborhoods are built around the schools, few kids have to walk more than 5-10 minutes (if that) to get to school.
Â  Â We happen to live 350 steps (I counted!) from our front door to the elementary school. Â I can see the school from my backyard.
Â  Â Our younger daughter is in first grade. Â I would say she is a “mature first grader” — responsible, very verbal, good common sense.
Â  Â Our older daughter began walking herself to and from school starting in first grade and did it for several years (she’s now in middle school) without incident. Â In fact, she loved it. Â She always walked in a fun mixed-age group with other kids.
Â  Â My younger daughter came home from school: Â The principal said nobody can walk to school alone until 3rd grade.
Â  Â I figured it had to be wrong but sure enough, the principal expressed disdainful horror and a very condescending attitude when I gave her the shocking news that I wanted my daughter to walk alone. Â (And in fact had been doing so since school started three weeks ago.) Â I emphasized that we live very close, there’s a crossing guard, it’s a 90 second walk, and I watch my daughter from our yard the entire time.
Â  Â It ended with, “Well, the law says I can’t force you to not let her, but we strongly discourage it.” Â She said she believes kids “don’t have the judgment” until at least 3rd grade.
Â  Â My question for other parents: Do *some* kids have the judgment? Â (I certainly believe my daughter does.) Â And whose call should this be? Â Am I a wingnut to believe this is within the parents’ purview, not the principal’s? Â I really worry for the future of America if the very person we pay to steward our kids’ education doesn’t believe they can walk down a street by themselves.
Â  Â What do others think? – Frustrated Mom
.
Dear Frustrated: I can’t imagine a neighborhood better suited for kids walking to school than yours, with its close-by school, sidewalks and crossing guards. What does it take for something to be SAFE ENOUGH? Apparently, for many Americans in 2012, that’s a funny question beause the answer is obvious:
.
Nothing is safe enough for our kids. Nothing. – L 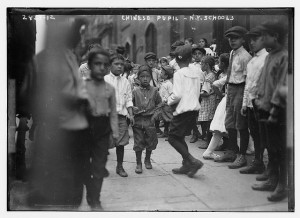 My guess is most of these kids were not driven to school.

“Who would leave a 10 year old in the library in these times?”
NYC Kids! Come to Central Park This Afternoon!

100 Responses to Help Needed: Can Kids Walk to School Alone in First Grade?