Readers, This blog, Math tfyzsdyafi
With Bad Drawings, says something I’m always trying to say — but adds bad drawings! Here are a few gems from the post, “Headlines from a Mathematically Literate World.”

So when, for instance, you read this (real) headline, that ran in the New York Post a few months back:

And the story begins:

Staying safe in this part of town is no walk in the park.

And goes on to say that:

Six rapes have been reported in the park so far this year. This time last year, that number was zero.

Burglaries also are up, with six this year versus one for the same period last year.

You can TRY to put that in perspective by doing the REAL math: Central Park gets 38,000,000 visitors/year. So one’s chances of being burglarized, for instance, appear to be 1 in 6,000,000+. Same with rape. So while this is truly awful for those involved, it is also — thank God — unbelievably rare. And yet, of course, the reporter quotes a woman saying:

“It is very concerning,” Cotto said.

Which it is. For anyone trying to stay sane in a mathematically illiterate, fear-drenched, headline-hollering world. – L. 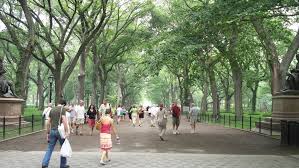 Don’t these poor people know they are DOOMED here in crime-escalating Central Park?