Readers ihksebfsyz
— This Atlantic.com essayÂ by Christine Gross-Loh, author of Â Parenting Without Borders, Â does a great job of shooting the alarmists down. (Couldn’t resist!) The Free-Range Kids angle? One of the chapters in my book is called, “Relax! Not Every Little Thing You Do Has That Much Impact on Your Child’s Development.” That includes curating their toys. – L.Â

Keeping Kids from Toy Guns: How One Mother Changed her Mind by Christine Gross-Loh

When my husband was growing up, the only boy in a family of all girls, his mother didn’t allow him to have any toy guns. He was a mild mannered, sweet little boy. But when he was five years old, he ran over to his friend’s house and “borrowed” one of the toy guns he had played with over there and coveted, stashing it in his bedroom.

For years, every time I heard what has become a famous family story I sided with my mother-in-law…. I had a keen desire to protect my boys, a certainty I could steer their play in the right direction, and a categorical abhorrence for violent toys of any kind. Their first toys were blocks, puzzles, and cooperative games. They were empathetic and kind boys. I felt no small triumph that my strategy had worked: my gentle sons didn’t even know what weapons were.

Then my firstborn went to a birthday party. In the goodie bags for these four-year-olds was a plastic toy gun. My son was utterly riveted. I tried to coax it away from him. “Bang bang!” he shouted, running around with the other kids. Just days later my shy little two year old fixated upon a toy sword that came with a pirate toy someone had given him, and would not go anywhere without it. I could see that the ludicrously small sword made him feel brave. I tried (unsuccessfully) to pry it out of his tiny hands. That he liked the weapon so much deeply unnerved me…

Lenore again: Read more here (especially the part about Japan, where the schools ENCOURAGE kids to play with toy guns)! And then you’ll get to my favorite paragraph:

Although many of us in America worry that gun play desensitizes kids to violence, the researchÂ doesn’t bear this out. In fact, it can actually help teach children to read each other’s facial cues and body language, figure out their place in a group, and learn how to adjust their behavior in social settings.…Â Children don’t see their own play through the lens that adults do. To children, gun play is play, while to American adults–especially in the post-Columbine or Newtown era–gun play is violence. 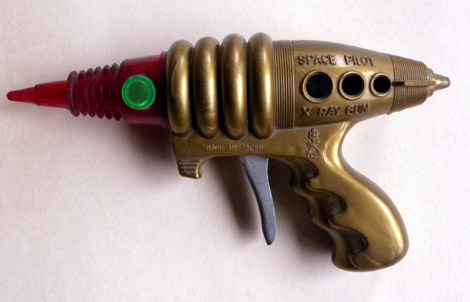 Is this an item of violence or fun?

Love Payless, Hate this Mommy Ad
Help Needed: What Would You Want Kids Doing in a “Free-Range” Day Care?

48 Responses to “I Thought My Sons Shouldn’t Play With Toy Guns. I Was Wrong.”