This izehifybtr
site tries not to wallow in nostalgia. (TRIES!) But the fact that this email comes from a reader who returned to EXACTLY where he grew up and saw only two kids is not just nostalgia, it’s anthropology:

Dear Free-Range Kids:Â Two summers ago, I revisited my hometown for the first time in 6 years, after my dad died. A small city actually – it grew to 50,000 souls and leveled off at that number about 3 decades ago.

The town is lovingly preserved….so much so that about 90% of all the schoolboy haunts I remember are still remarkably intact.Â In the entire weekend I was there, I counted exactly two small children playing in a yard adjacent to the back lane I used to take to school. That’s it.

There was a kind of post-apocalyptic feel to the streets….a beautiful summer weekend….and nobody was out.Â Ironically, where most of the kids now are, is squashed into the few newer subdivisions on the southern outskirts of town, that didn’t exist when I lived there.Â Adjacent to those subdivisions is a huge tract of virgin woodland – left as a kind of semi-park, but still very wild.

Not a kid in sight, anywhere.

So “I” played there myself. (I guess I was the danger stranger of the hour.)

That town was a Free-Range Kid’s paradise.

And it still is.

It is a strange experience in life…..to feel an empty schoolyard playground weep.

Recently, I went back to my hometown suburb outside of Chicago, too. The local grammar school we’d all walked to now had signs declaring, “ONE WAY TRAFFIC ONLY DURING DROP-OFF AND PICK-UP HOURS,” indicating, I think you’ll agree, a new norm of student transport.

So let me wallow for a sec in remembering the bad — it was Chicago! Freezing! — and the good of walking to school: the crunching leaves, the trees whose berries you could make into necklaces (that inevitably shriveled), the forsythia when it finally bloomed.

At Free-Range Kids, all we’re trying to do is give some of that back to today’s kids. We realize times and technology change, and this isn’t only good or bad. I mean, here we are on the Internet! But the world — the outside world, and free time in it — is still there. It’s just the kids that aren’t. 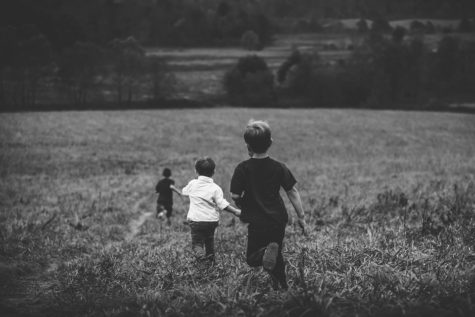 It’s hard to find vintage photos of kids playing outside because there weren’t adults standing by to scrapbook them!