Hi Readers! A couple of you sent in this provocative piece, Â “Three fshdfeaddf
Huge Mistakes We Make Leading Kids…And How to Correct Them.” It’s Â by Tim Elmore, Â a writer/speaker specializing in leadership. His philosophy about what kids require to become confident, competent and, well, leaders dovetails remarkably with Free-Range Kids’. After warning parents that children need more risk and less mindless reward (like constantly being told they’re great for doing ordinary things), he writes:

This may sound harsh, but rescuing and over-indulging our children is one of the most insidious forms of child abuse. Itâ€™s â€œparenting for the short-termâ€ and it sorely misses the point of leadershipâ€”to equip our young people to do it without help. Just like muscles atrophy inside of a cast due to disuse, their social, emotional, spiritual and intellectual muscles can shrink because theyâ€™re not exercised. For example, I remember when and where I learned the art of conflict resolution. I was eleven years old, and everyday about fifteen boys would gather after school to play baseball. We would choose sides and umpire our games. Through that consistent exercise, I learned to resolve conflict. I had to. Today, if the kids are outside at all, there are likely four mothers present doing the conflict resolution for them.

While I totally do not think that parents all of a sudden became neurotic child-obsessers — it’s the culture we live in that pretty much demands that type of involvement — I agree that when we give kids time on their own, unsupervised and unscheduled, they learn all sorts of lessons…most of them good. In fact, most of them great. It’s not “abuse” to hover and helicopter, but it sure isn’t helping our kids. – L 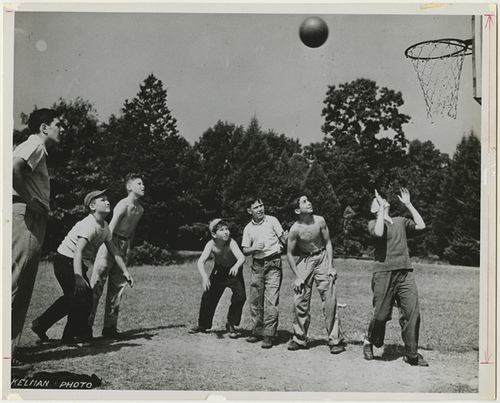 Where are their parents? Luckily, not around.

“How to Protect Your Family from Social Media” — As If It’s the Flu
Does Singing About Friendship & Self-Esteem Create Those?