If you can stand it, please take a look at nzrdkrsesn
this articleÂ from the Sydney Morning Herald about the death of a 5-year-old boy who tripped on his pre-school’s steps.

Is it just me or is the way it’s presented…sickening?

The story features photo after photo of the sweet-looking child: five of them, one sadder than the next, since we all know that this boy will never smile again. Â It’s as if the paper is banging us over the head with pain…but to what end? What is it trying to do with this kind of coverage? Here’s a snippet:

…Speaking publicly for the first time about the loss of their only child, Ms Qaseem and her husband Shadan Ahmad say their lives have been irreparably shattered.

They are still searching for answers.

“He had no medical conditions, he was a healthy boy,” Ms Qaseem said.

“He had no marks or scratches on his face.

“We dropped him off at school and he was fine, but he never came home that night.”

Ms Qaseem broke down as she described her son, a boy with a bubbly and infectious personality who radiated light into the lives of everybody he met.

“There was nothing bad about Sufi, only goodness and kindness,” she said.

“He was just a beautiful little boy, very caring and always complimenting me. He was only five years old, but he was my best-friend. He was very close to his dad as well. Our hearts are broken.”

The paper says it is believed he died when “he fell on two outdoor concrete stairs during after-school care and hit his head on a nearby pole.”

In their grief, the parents are now saying they want more supervision —

…to ensure no family experiences their pain.

They are calling for the national roll-out of more stringent protocols when it comes to the safety of children, including the installation of CCTV cameras in playgrounds and a buddy system to ensure no child ever wanders off on their own.

But how does a camera prevent someone from falling down the steps? How does a buddy? What if this boy and his friend had been holding hands and they BOTH tripped? How is that any odder than the idea that a buddy would somehow prevent a mis-step?

The mom is pregnant and for that I am grateful, even though obviously one child does not make up for the loss of another.

But I am not grateful for an article spreading anguish so deliberately, and presenting a “solution” so pointless. I feel there is something significant and unseemly about the way the paper is playing this story, as if it’sÂ daring us not to despair. I wonder if you feel it, too. Â – L 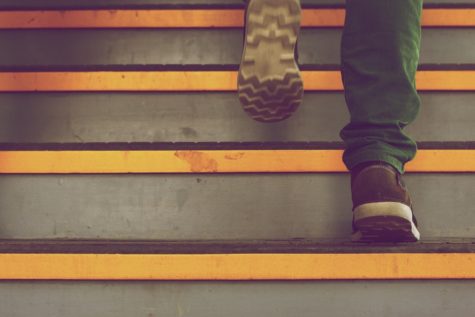 These are not the steps the boy tripped down. But I needed a photo and did not want to show the boy himself.

Doggie Slobber is Good for Kids
Welcome to School! No Entry Without Your Fingerprint

36 Responses to Is Newspaper Trying to Make this 5-Year-Old’s Death EVEN SADDER?