Hi Folks! I appreciate this writer’s dilemma and asked Jill Vialet, the founder of Playworks , and author of the new book Recess Rules to respond! I love her organization and learned a bunch of almost uncannily fun games at a workshop they gave in NYC a few years back. (And I’m not much of a playground game person myself.) – L

Dear Free-Range Kids: I love the Free-Range philosophy and was wondering if you could do a post on how to address actual bullying while staying Free-Range? I teach at a very very small school and we have minimal supervision for the K-5 kids during lunch (45 minutes). Lately weâ€™ve learned that several (3, maybe more) of the kids are being socially isolated by a larger group (about 5 ringleaders, influencing about 20 kids total) though â€œgamesâ€ such as keep-away/ignoring, as well as supposedly slapping and grabbing and pushing/pulling another child into an empty classroom and telling the child to â€œjust stay here I donâ€™t want to see you!â€ (No, they werenâ€™t playing a game.) Or, a group of kids will whisper/laugh and point at a target child. Itâ€™s gotten to the point where one child doesnâ€™t even want to go to school anymore. Iâ€™ve taught for several years and Iâ€™ve seen a wide variety of kid tussles/disagreements but my gut feeling is that this goes beyond that.

Weâ€™ve tried addressing â€œhow to be kind,â€ â€œwhat is bullying behavior,â€ â€œno bullying will be toleratedâ€ in classes, but itâ€™s made minimal progress.

Itâ€™s complicated because itâ€™s a small community, and I honestly feel like some of the bullies are copying their parentsâ€™ behavior (parents gossip about each other and have parties where the invite lists purposely exclude other families â€“ the same families that the bullied kids are in- yikes!). Not to mention that the parents of the bullies are staunchly opposed to the thought that their angel children (intellectually very bright and very helpful/compliant in front of adults) could be that mean, and â€œkids are kids.â€

One solution is to not have â€œfree timeâ€ anymore and implement structured activity during lunch. I hate that it takes away the kidsâ€™ time to play on their own. I also donâ€™t think itâ€™s right to force kids to play with each other. Soâ€¦ Iâ€™m hoping you have some other ideas!

To which Jill Vialet writes:Â

Molly â€” Iâ€™m afraid what youâ€™re describing is something I hear about quite a lot. But as the founder of Playworks, a group that both provides training and sends staff into schools, Iâ€™ve found that it is possible to make recess fun again.Â Our staff â€“ and the folks we train — organize games while teaching students to be â€œJunior Coaches.â€Â  For the Junior Coach program we recommend choosing kids who are naturally leaders, and including both those kids who are using their superpowers for good, as well as those who are sometimes leading in the wrong direction. Â

We find this â€œteachingâ€ necessary because the kids havenâ€™t learned games from their older friends and siblings the way we used to. Kids literally donâ€™t know how to start or sustain a game because theyâ€™ve never seen it happen. So our staff help bring that skill back. They also teach kids â€œrock, paper, scissors,â€ the amazingly effective way to solve conflicts quickly, easily and fairly. (Grown-ups might consider using it more, too. Like, in Congress.)

Playworks is not always seen as a â€œFree-Rangeâ€ approach because we encourage a level of grown-up engagement that could be seen as running counter to the ethos.Â  But at Playworks, weâ€™ve always seen ourselves as being closely aligned, because it we believeÂ in the power of play to bring out the best in every kid. [Lenore here: I agree!]

We start from a place of understanding that our role is to build an environment that is conducive to a culture of kindness. Our job as grown-ups is to model empathy, teamwork, leadership and inclusion. Â Once that environment is established, itâ€™s our job to get out of the way and let kids be the drivers. Â Let them develop their own skills as changemakers.

I have often thought that one of the great paradoxes of Free-Range Kids is that the one essential precondition to kids taking healthy risks is that they feel essentially safe.Â  Not the padding-on-coffee-tables safe.Â  But safe, as in operating in a system where there is a semblance of order, and when things go wrong (because they will), they know what to do.Â  Not coincidentally, it is this same sense of safety that is an essential precondition to learning.

I was in Arizona a couple of weeks ago and met a young man who had been a Playworks junior coach. Now a 7th grader, he looked back nostalgically at his elementary school years and explained to me that he had been a trouble-maker and a bit of a bully. â€œBut then Playworks came to my school,â€ he explained. â€œAnd it just made more sense to be a junior coach. It was just more fun.â€

So my answer about how to make the recess time less mean, is to suggest that you and some of the other teachers go out and play along side the kids, modeling the behaviors you hope to encourage.Â  Resist taking away break time, and I agree about not forcing kids to play together.Â  But you should do what you can to make playing in an un-mean way the coolest, funnest, best gig in town. Â (Get our free book of game ideasÂ here.) Â And then, as play works its magic, bringing out the best in every kid, make sure to allow the kids to lead, with you playing in support, but not overshadowing.Â – J.V. 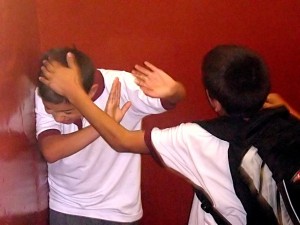 Can kids really change, through play?

Do Helicoptered Kids Do Better? A Free-Ranged Young Woman Weighs In on
Warning: Man Seen in Van! Parents, Please Tell Your Kids

75 Responses to Is There a Free-Range Way to Deal with REAL Recess Bullying?