TovahÂ Klein is author of How fnsyaekdbd
Toddlers Thrive (Simon & Schuster, 2014), available online & in stores. She’s also director of the Barnard College Center for Toddler Development, and has been for over 20 years — she knows her stuff. I get her RSS feed and it is often so interesting, I find myself reading the whole thing, even though my kids are far from toddlers. Â That’s what happened the other day, and I asked if I could reprint her answer to this mom of a 4-year-old’s pressing question:

â€œMy son is very social and loves to be outside.Â He runs around a lot so I try to find ways to get him out of the house, especially on the weekends. We signed him up for soccer on Saturdays.Â His best little buddy goes so I figured heâ€™d enjoy it.Â But all he does is watch. He refuses to participate. I ask him later if he likes soccer and he says he does.Â Sometimes he does not want to go, though.Â Do I take him out of it? I worry he will learn it is okay to quit things.Â Or is he just too young (even though the other children enjoy it)?â€Tovah responded:

This is an all-too-common scenario for children at this age and stage of their young lives. The class, lesson or sport sounds ideal (to you, the parents, at least), and yet your child is not willing to participate, would rather observe, or refuses to get in the pool or go out on the field altogether.I understand why this is confusing, especially when youâ€™ve observed that your child loves playing with other children, kicking or throwing a ball, being outside (or all three!) but as soon as you enroll her in a group activity, she shuts down.Â When my first child was a young toddler, I enrolled him in a music class with me. He loved listening to and creating music on his own at home, so I figured the class would be a great fit. Instead, he spent the hour of class shying quietly away from the group and never participating. The music instructor was not so kind. When the session was over, she suggested that I skip enrolling him for the next term.Â I was embarrassed and wished that my son had better taken to the class (and that I hadnâ€™t wasted a bunch of money learning the hard way that just because he liked music didnâ€™t mean heâ€™d like music class). For several years, my son refused to be part of group activities and I struggled between letting him just be and worrying if his reaction was â€œnormal.â€ Then, at age eight he begged us to play Little League baseball. Ten years later, at eighteen, he is playing his final season.Whatâ€™s the lesson? Donâ€™t push it. This lesson is backed by developmental research. Children who are put into activities too young are likely to feel frustration and refuse to participate or drop out. The experience may even turn your child off to the activity for the long term.Â Wait until your child is older and more ready, which varies greatly from child to child. As a basic guideline, the American Academy of Pediatrics warns that group sports activities are not appropriate before age 6. I encourage you to think similarly about other adult-led group classes for toddlers.WHATâ€™S GOING ON?

I understand the urge of parents to sign their kids up for all kinds of activities. In the last several years, organized classes and events for young ones have proliferated at an exponential rate. Itâ€™s become like a rite of childhood passage, and it may seem like the earlier you start your child on skill building, the better. But in fact, the opposite holds true. Why?Group activities require children to pay attention, listen and follow instructions to do the activity or sport a certain way. These are all good skills for your child to learn and master, except that young children, and toddlers in particular, learn differently. At this young age they learn best by hands-on doing, making up their own rules, experimenting, making mistakes and coming up with various ways to meet their goal.Â Group sports, lessons and other activities circumvent this process because the child is not self directed but led by an adult.Â While many of these group activities appear to be fun for your child, there can be negative, longer-term costs. These activities can actually work against your childâ€™s development as they take away from free play and figuring things out on their own (with adult support when needed) that is central to this stage of learning. Before age six, hands off works better than hands on.

Agreed! And even after six, Â all the way up to senility. (A cheery thought.)

Meantime, you can find Tovah onÂ Facebook– How Toddlers Thrive, onÂ Twitter– @tovahklein, or at howtoddlersthrive.com. You’ll be glad you did! 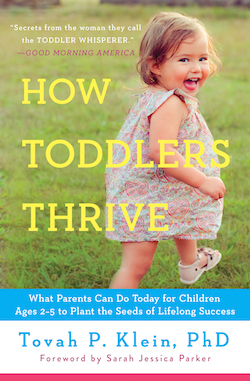 50 Responses to Is My Toddler Ready for Organized Sports? Wise Advice from Tovah Klein